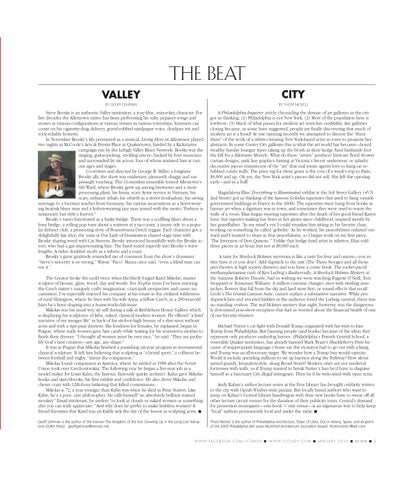 Steve Brosky is an authentic Valley institution, a true-blue, minor-key character. For five decades the Allentown native has been performing his salty, peppery songs and stories in various configurations at various venues in various townships. Listeners can count on his cigarette-drag delivery, gravel-rubbed sandpaper voice, deadpan wit and rock-reliable honesty. In November Brosky’s life premiered as a musical. Living Here in Allentown played two nights at McCoole’s Arts & Events Place in Quakertown, funded by a Kickstarter campaign run by the Lehigh Valley Blues Network. Brosky was the singing, guitar-picking, strolling emcee, backed by four musicians and surrounded by six actors. four of whom imitated him at various ages and stages. Co-written and directed by George B. Miller, a longtime Brosky ally, the show was exuberant, pleasantly shaggy and surprisingly touching. The 11-member ensemble toured Allentown’s 6th Ward, where Brosky grew up among breweries and a meatprocessing plant; his funny, scary Army service in Vietnam; his scary, unfunny rehab; his rebirth as a street troubadour; his saving marriage to a German teacher from Germany; his various incarnations as a beret-wearing beatnik blues man and a fedora-wearing jazz man armed with the motto “Fashion is temporary, but style’s forever.” Brosky’s tunes functioned as a funky bridge. There was a scuffling blues about a busy bridge, a rolling pop tune about a waitress at a taco joint, a jaunty ode to a popular defunct club, a pioneering dose of Pennsylvania Dutch reggae. Each character got a delightfully fair shot; the nuns at Our Lady of Domination shared stage time with Brosky sharing weed with Cat Stevens. Brosky interacted beautifully with the Brosky actors, who had a gas impersonating him. The band tuned expertly into Brosky’s wavelengths. A video doubled nicely as a tribute and a roast. Brosky’s great gratitude reminded me of comment from the show’s drummer. “Steve’s sincerity is so strong,” Wayne “Paco” Maura once said, “even a blind man can see it.”

A Philadelphia Inquirer article chronicling the demise of art galleries in the city got us thinking. (1) Philadelphia is not New York; (2) Most of the population here is lowbrow; (3) Much of what passes for modern art stretches credibility. Are galleries closing because, as some have suggested, people are finally discovering that much of modern art is a fraud? At one opening recently we attempted to discern the “there there” of the work of a stiletto wearing New York-based artist in town to promote her abstracts. In some Center City galleries this is what the art world has become—bored wealthy Sunday lounger types taking up the brush as their hedge fund husbands foot the bill for a dilettante lifestyle. What do these “artists” produce? Intricate floral shower curtain designs, pink line graphics hinting at Victoria’s Secret underwear, or splashy decorative pieces reminiscent of the “art” that real estate agents love to hang on rehabbed condo walls. The price tag for these gems is the cost of a week’s trip to Paris, $8,000 and up. Oh yes, the New York artist’s pieces did not sell. She left the opening early—and in a huff.

The Creator broke the mold twice when He/She/It forged Karel Mikolas, master sculptor of bronze, glass, wood, clay and words. For 30-plus years I’ve been enjoying the Czech native’s uniquely crafty imagination, crazy-quilt perspective and canny uncanniness. I’ve especially enjoyed his company at his estate in the civilized wilderness of rural Slatington, where he lives with his wife Anna, a fellow Czech, in a 200-year-old barn he’s been shaping into a home/studio/lab/maze. Mikolas was his usual wry, sly self during a talk at Bethlehem House Gallery. which is displaying his sculptures of lithe, naked, classical/modern women. He offered “a brief narrative of my meager life” in back of his six-foot-high bronze of a slim siren without arms and with a ripe-pear derriere. His fondness for females, he explained, began in Prague, where nude women gave him candy while waiting for his seamstress mother to finish their dresses. “I thought all women must be very nice,” he said. “They are probably God’s best creation—any age, any shape.” It was in Prague that Mikolas finished a punishing six-year program in monumental classical sculpture. It left him believing that sculpting is “a brutal sport,” a collision between football and rugby, “minus the compassion.” Mikolas found compassion in America, where he settled in 1968 after the Soviet Union took over Czechoslovakia. The following year he began a five-year job as a model maker for Louis Kahn, the famous, famously quirky architect. Kahn gave Mikolas books and sketchbooks, his first exhibit and confidence. He also drove Mikolas and clients crazy with 12th-hour tinkering that killed commissions. Mikolas is 72, a year younger than Kahn was when he died in Penn Station. Like Kahn, he’s a pure, rare philosopher. He calls himself “an absolutely brilliant trained monkey.” Email intolerant, he prefers “to look at clouds or naked women or something else you can truly appreciate.” And why does he prefer to make limbless women? A friend theorizes that Karel was probably sick the day of the lesson in sculpting arms. ■ Geoff Gehman is the author of the memoir The Kingdom of the Kid: Growing Up in the Long-Lost Hamptons (SUNY Press). geoffgehman@verizon.net.

Magadalena Elias’ Everything is Illuminated exhibit at the 3rd Street Gallery (45 N. 2nd Street) got us thinking of the famous Gobelin tapestries that used to hang outside government buildings in France in the 1600s. The tapestries were hung from hooks as banner art when a dignitary was in town, and sometimes they were used to warm the walls of a room. Elias began weaving tapestries after the death of her good friend Karen Lenz, but tapestry-making has been in her genes since childhood, inspired mostly by her grandfather. “In my mind’s eye I could visualize him sitting in his favorite chair, working on something he called ‘gobelin.’ As he worked, his peacefulness radiated outward and I wanted to share in that peacefulness, so I began work on my first piece, ‘The Inversion of Don Quixote.’” Unlike that hedge fund artist in stilettos, Elias sold three pieces in an hour, but not at $8,000 each. A taste for Sherlock Holmes mysteries is like a taste for liver and onions—you either have it or you don’t. Add slapstick to the mix (The Three Stooges and all those pies thrown at high society dinners) and you have a comic book. The rocket-paced methamphetamine rush of Ken Ludwig’s Baskervulle, A Sherlock Holmes Mystery at the Suzanne Roberts Theatre, had us wishing we were watching Eugene O’Neill, Tom Stoppard or Tennessee Williams. A million costume changes, men with twirling mustaches, flowers that fall from the sky and land stem first, or sound effects that recall Grofe’s The Grand Canyon Suite, cannot replace a substantive narrative. While proslapstick fans and assorted kiddies in the audience loved the Ludwig carnival, there was no standing ovation. The real Holmes mystery that night, however, was the dangerously downsized post-show reception that had us worried about the financial health of one of our favorite theaters. Michael Nutter’s cat fight with Donald Trump originated with his wish to ban Trump from Philadelphia. But banning people (and books) because of the ideas they represent only produces underdog heroes. (Philadelphia’s Friends Central School, a venerable Quaker institution, has already banned Mark Twain’s Huckleberry Finn because of inappropriate language.) Some say the ex-mayor had to go out with a bang, and Trump was an all-too-easy target. We wonder how a Trump ban would operate. Would it include spending millions to set up barriers along the Parkway? How about armed guards, Jerusalem-style, along Broad Street? Modern cities are not medieval fortresses with walls, so if Trump wanted to break Nutter’s ban he’d have to disguise himself as a Sanctuary City illegal immigrant. Then he’d be welcomed with open arms. Andy Kahan’s author lecture series at the Free Library has brought celebrity writers to the city with Oprah Winfrey-style pizzazz. But locally based authors who want to jump on Kahan’s Central Library bandwagon with their new books have to swear off all other lecture circuit venues for the duration of their publicity tours. Central’s demand for promotion monogamy—one book = one venue—is an ingenuous way to help keep “local” authors permanently local and under the radar. ■ Thom Nickels is the author of Philadelphia Architecture, Tropic of Libra, Out in History, Spore, and recipient of the 2005 Philadelphia AIA Lewis Mumford Architecture Journalism Award. thomnickels1@aol.com ICON is a sophisticated yet unpretentious, quirky yet serious, cultural monthly magazine with a focus on entertainment, fine and performing...

ICON is a sophisticated yet unpretentious, quirky yet serious, cultural monthly magazine with a focus on entertainment, fine and performing...