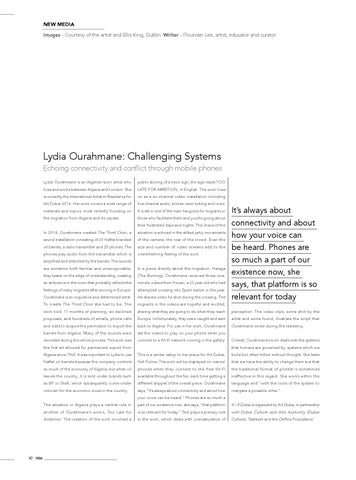 lives and works between Algeria and London. She

LATE FOR AMBITION, in English. The work lives

is currently the international Artist-in-Residence for

on as a six-channel video installation including

Art Dubai 2016. Her work covers a wide range of

materials and topics, most recently focusing on

the migration from Algeria and its causes.

those who facilitate them and youths going about their frustrated days and nights. The chaos of the

In 2014, Ourahmane created The Third Choir, a

situation is echoed in the stilted jerky movements

of the camera, the roar of the crowd. Even the

oil barrels, a radio transmitter and 20 phones. The

size and number of video screens add to the

phones play audio from the transmitter which is

overwhelming feeling of the work.

amplified and distorted by the barrels. The sounds

It’s always about connectivity and about how your voice can be heard. Phones are so much a part of our existence now, she says, that platform is so relevant for today

are somehow both familiar and unrecognizable;

In a piece directly about the migration, Haraga

they teeter on the edge of understanding, creating

(The Burning), Ourahmane received three one-

an ambience in the room that probably reflects the

minute videos from Houari, a 25 year old who had

feelings of many migrants after arriving in Europe.

attempted crossing into Spain earlier in the year.

Ourahmane is an inquisitive and determined artist.

He shared video he shot during the crossing. The

To create The Third Choir she had to be. The

migrants in the videos are hopeful and excited,

sharing what they are going to do when they reach

perception. The video clips, some shot by the

Europe. Unfortunately, they were caught and sent

artist and some found, illustrate the script that

and visits to acquire the permission to export the

back to Algeria. For use in her work, Ourahmane

Ourahmane wrote during the residency.

barrels from Algeria. Many of the sounds were

set the videos to play on your phone when you

recorded during this whole process. This work was

connect to a Wi-Fi network running in the gallery.

the first art allowed for permanent export from

Overall, Ourahmane’s work deals with the systems that humans are governed by, systems which we

Algeria since 1962. It was important to Lydia to use

This is a similar setup to her piece for Art Dubai,

Felt Fiction. The work will be displayed on visitors’

that we have the ability to change them but that

so much of the economy of Algeria, but when oil

phones when they connect to the free Wi-Fi

the traditional format of protest is sometimes

leaves the country, it is sold under brands such

available throughout the fair, each time getting a

ineffective in this regard. She works within the

as BP or Shell, which subsequently come under

language and “with the tools of the system to

criticism for the economic woes in the country.

says, “It’s always about connectivity and about how

instigate a possible other.”

your voice can be heard.” Phones are so much a

The situation in Algeria plays a central role in

part of our existence now, she says, “that platform

A.i.R Dubai is organized by Art Dubai, in partnership

another of Ourahmane’s works, Too Late for

is so relevant for today.” Text plays a primary role

Ambition. The creation of the work involved a

in the work, which deals with oversaturation of

Culture), Tashkeel and the Delfina Foundation.

Photography and New Media from the Arab world 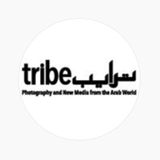