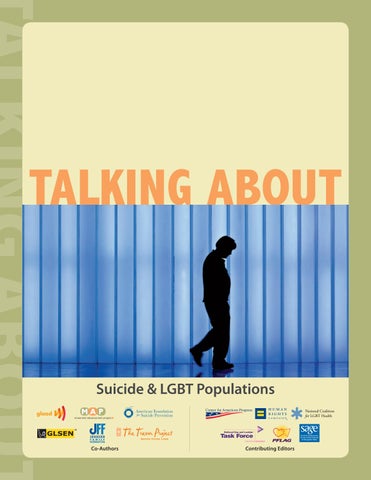 INTRODUCTION Expansive news coverage of several recent suicide deaths of youth known or believed to be gay has resulted in an unprecedented national discussion about suicide risk among lesbian, gay, bisexual and transgender (LGBT) people. Some of that coverage, however, has oversimplified or sensationalized a number of the underlying issues, and in some cases may have created the potential for suicide contagion risk (see below). This guide provides ways to talk about suicide safely and effectively, while advancing vital public discussions about preventing suicide, helping increase acceptance of LGBT people, and supporting their well-being. The recommendations that follow were adapted in part from existing research and media education materials developed by leading suicide prevention organizations, including the American Foundation for Suicide Prevention and the Suicide Prevention Resource Center. To access some of these original resources, please visit www.lgbtmap.org/talking-about-suicide.

WHAT IS SUICIDE CONTAGION? Research has shown a link between certain kinds of public visibility and media coverage about suicide, and increases in suicide deaths—a phenomenon known as suicide contagion. Suicide contagion is most likely to occur among persons who are already seriously depressed or contemplating suicide. Contagion risk has been observed when: •• The number of stories about individual suicides increases. •• A particular death is reported in great detail across many stories. •• Coverage of a suicide death is placed on the front page of a newspaper or at the top of a newscast. •• The headlines about specific suicide deaths are framed dramatically (for example, “Bullied Gay Teen Commits Suicide by Jumping from Bridge”). However, research also shows that risk of suicide contagion can be reduced when media report on suicide in a responsible way.

TALKING ABOUT SUICIDE IN SAFE &amp; ACCURATE WAYS The need for safe public discussions about suicide cannot be overstated. They are a critical part of protecting the health and safety of individuals at risk for suicide. The following 12 recommendations can expand these important

Bullying &amp; Suicide Research shows that LGBT youth report higher rates of anti-LGBT harassment and bullying than straight youth. But not every person who is the target of anti-LGBT bullying is LGBT. Many who are bullied are targeted because of their perceived sexual orientation or because they do not conform to someone’s expectations about gender. The relationship between bullying and suicide is complex. Research indicates that persistent bullying can lead to or worsen feelings of isolation, rejection, exclusion and despair, as well as to depression and anxiety, which can contribute to suicidal behavior. However, it is also important to note that the large majority of people who experience bullying do not become suicidal. Suggesting that suicide is a natural response to bullying can lead media to emphasize details that could increase contagion risk. If at-risk people see their own experiences of bullying, isolation or exclusion reflected in stories of those who have died, they may be more likely to think of suicide as a solution to problems they are experiencing. Whenever possible, focus discussions on the need to systemically address anti-LGBT bullying—but do so in ways that don’t increase suicide contagion risk. Avoid taking shortcuts (for example, avoid saying “bullying causes suicide”) or using terms like “bullycide.” Instead, connect the need for bullying prevention back to the responsibility of individuals (like parents, family and friends), institutions (like schools), laws and society to ensure and promote the health, safety and overall well-being of people of all ages.

conversations while helping ensure that public discussions about suicide avoid inaccuracies and minimize risk for vulnerable LGBT people: 1. DO emphasize individual and collective responsibility for supporting the well-being of LGBT people. Remind people that individuals, families, communities and the whole of society have a responsibility to promote a culture that welcomes, accepts and supports LGBT people for who they are. 2. DO encourage help-seeking by LGBT people who may be contemplating suicide, and emphasize the availability of supportive resources. Young LGBT people, in particular, don’t often hear that there are adults who care about them and to whom they can go for help.

3. DO emphasize the vital importance of family support and acceptance—not just as a factor that can help protect against suicide, but also as a crucial part of nurturing the emotional and psychological well-being of LGBT and questioning youth. Family acceptance builds and supports the health and well-being of LGBT youth. Discussions that follow youth suicide deaths present an important opportunity to remind people— and families of LGBT youth in particular—of how important it is to love, embrace and accept their entire child for all of who they are. 4. DON’T include details of a suicide death in titles or headlines. Headlines are often the only things people read, and the need to make them short and attentiongrabbing can lead to an emphasis on messages that can increase contagion risk. Also, headlines are often the only things that appear on social media outlets like Facebook, where contagion risks can also be elevated (see Talking About Suicide in Social Media). 5. DON’T describe the method used in a suicide death. Research shows that detailed descriptions of a person’s suicide death can be a factor in leading vulnerable individuals to imitate the act. 6. DON’T attribute a suicide death to experiences known or believed to have occurred shortly before the person died. The underlying causes of most suicide deaths are complex and not always immediately obvious. Making hasty assumptions about those causes, even when based on comments from family or friends or media reports, can result in statements that are later proven to be inaccurate. Don’t risk perpetuating false or misleading information by jumping to conclusions about the reasons for a particular suicide death. Also, directly attributing a suicide to bullying or another negative life event can increase contagion risk among vulnerable individuals who have similar experiences. 7. DON’T normalize suicide by presenting it as the logical consequence of the kinds of bullying, rejection, discrimination and exclusion that LGBT people often experience. Presenting suicide as the inexplicable act of an otherwise healthy LGBT person—or drawing a direct, causal link between suicide and the bullying or discrimination that LGBT people often face—can encourage atrisk individuals to identify with the victim (or the victim’s life circumstances) and increase risk of suicidal behavior. 8. DON’T idealize suicide victims or create an aura of celebrity around them. Research shows that idealizing people who have died by suicide may encourage others to identify with the victim or seek to emulate them.

Research Findings on Suicide Discussions about suicide deaths often rely heavily on numbers and statistics. The following researchbased findings may be helpful in understanding the complexities of suicide ideation and behavior. •• A suicide attempt is not a strong predictor of completed suicide. Four out of five people (80%) who die by suicide are male. However, three out of every four people (75%) who make a suicide attempt are female. •• Suicide rates generally increase with age, with the highest rates among those in the midlife years. •• There is very little solid information available about suicide deaths among LGBT people. For this reason, be careful not to misrepresent data on suicide attempts by LGBT people as indicative of LGBT suicide deaths. The two are not the same. •• In U.S. surveys, lesbian, gay and bi adolescents and adults have two to six times higher rates of reported suicide attempts compared to comparable straight people. •• Surveys of transgender people consistently report markedly high rates of suicide attempts. •• Two key suicide risk factors for LGBT people are individual-level factors such as depression and experiences of stigma and discrimination, including anti-LGBT hostility, harassment, bullying and family rejection. There is growing evidence that the two factors are linked. 9. DON’T use terms like “bullycide.” This inaccurate word suggests the murder of a bully, not a suicide death. It can also elevate contagion risk by suggesting that suicide is a natural response to bullying. 10. DON’T talk about suicide “epidemics.” This can encourage at-risk individuals to see themselves as part of a larger story and may elevate suicide risk. 11. DON’T use words like “successful,” “unsuccessful” or “failed” when talking about suicide. It is extremely dangerous to suggest that non-fatal suicide attempts represent “failure,” or that completed suicides are “successful.” Instead, simply talk about a suicide death or attempted suicide. Also avoid the phrase “committed suicide.” The word “committed” is usually associated with a criminal act and can re-victimize surviving family. Say died by suicide or that the death was a suicide death instead.

12. DON’T say that a specific policy (or its absence) will in and of itself “prevent suicide.” Instead, talk about how anti-LGBT laws or policies have been shown to negatively impact the well-being of LGBT people (for example, the American Psychological Association has noted many negative health effects of excluding gay and lesbian couples from marriage).

TALKING ABOUT SUICIDE IN SOCIAL MEDIA Social media are a vitally important vehicle for expanding public conversations about the well-being of LGBT people, promoting the need for family support and acceptance, and encouraging help-seeking by LGBT people who may be contemplating suicide. The first three recommendations in the Talking About Suicide in Safe &amp; Accurate Ways section can provide a strong foundation for talking about these issues in social media. However, because of the nature, reach and speed of social media, platforms like Facebook, Twitter and blogs can also elevate contagion risks associated with unsafe media discussions about suicide. In an age of increasingly rapid and dense information, brevity is often the currency of social media. But that brevity can make it difficult to communicate complexity and nuance in social media, and as a result, social media can present unique risks and challenges when talking about suicide. Everything from re-tweeting to “liking” or “sharing” a Facebook post gives social media a speed and uncontainability that, while not necessarily problematic in everyday contexts, can quickly spread misinformation about a suicide death or endanger at-risk individuals who may be contemplating suicide. For those reasons: •• Don’t use Twitter or Facebook to announce news of suicide deaths. •• Don’t give details of a suicide death (for example, details about means of death) or the ages/personal details of the victim on Twitter or Facebook. •• Don’t re-post problematic mainstream media headlines (for example, “Student, 15, Commits Suicide Over Bullying”) on Facebook or Twitter.

•• Don’t talk about suicide “epidemics” in social media. •• Be careful how you phrase things on Facebook. Because Facebook users routinely “Like” posts that interest them or that they want to follow comments on, a post titled “Suicide Claims Life of Another Gay Teen” could be painful for surviving family and/or create a public backlash if people start to “Like” it. Similarly, a suicide-related post titled “Bullying Is Killing LGBT Teens” could increase contagion risk by suggesting that suicide is a natural response to bullying. 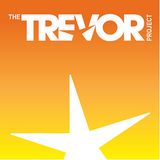