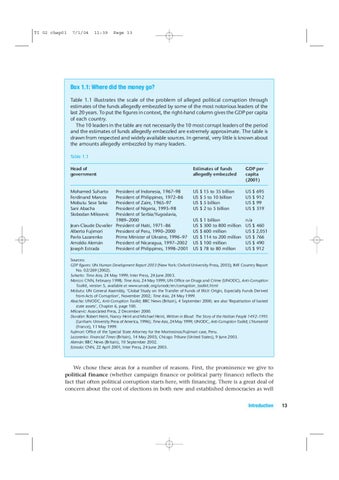 Box 1.1: Where did the money go? Table 1.1 illustrates the scale of the problem of alleged political corruption through estimates of the funds allegedly embezzled by some of the most notorious leaders of the last 20 years. To put the figures in context, the right-hand column gives the GDP per capita of each country. The 10 leaders in the table are not necessarily the 10 most corrupt leaders of the period and the estimates of funds allegedly embezzled are extremely approximate. The table is drawn from respected and widely available sources. In general, very little is known about the amounts allegedly embezzled by many leaders. Table 1.1 Head of government

We chose these areas for a number of reasons. First, the prominence we give to political finance (whether campaign finance or political party finance) reflects the fact that often political corruption starts here, with financing. There is a great deal of concern about the cost of elections in both new and established democracies as well Introduction

The 2004 edition of the Global Corruption Report focuses on corruption in the political process and on the insidious impact of corrupt politics on public life in societies across the globe. It includes a special section on political corruption with expert reports on the regulation of political finance worldwide, the practice of vote buying, barriers to transparency in the arms and oil sectors as well as efforts to repatriate wealth looted by politicians. 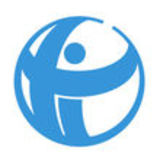