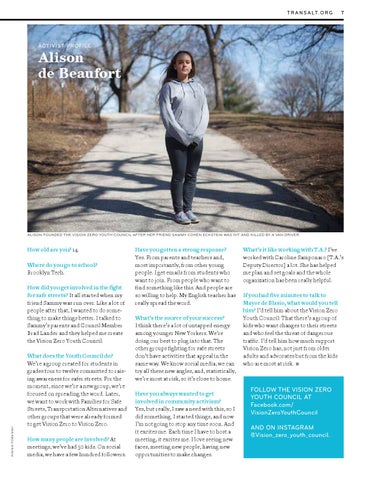 ALISON FOUNDED THE VISION ZERO YOUTH COUNCIL AFTER HER FRIEND SAMMY COHEN ECKSTEIN WAS HIT AND KILLED BY A VAN DRIVER.

How old are you? 14. Where do you go to school? Brooklyn Tech.

How did you get involved in the fight for safe streets? It all started when my friend Sammy was run over. Like a lot of people after that, I wanted to do something to make things better. I talked to Sammy’s parents and Council Member Brad Lander and they helped me create the Vision Zero Youth Council. What does the Youth Council do? We’re a group created for students in grades four to twelve committed to raising awareness for safer streets. For the moment, since we’re a new group, we’re focused on spreading the word. Later, we want to work with Families for Safe Streets, Transportation Alternatives and other groups that were already formed to get Vision Zero to Vision Zero. How many people are involved? At meetings, we’ve had 30 kids. On social media, we have a few hundred followers.

Have you gotten a strong response? Yes. From parents and teachers and, most importantly, from other young people. I get emails from students who want to join. From people who want to find something like this. And people are so willing to help. My English teacher has really spread the word. What’s the source of your success? I think there’s a lot of untapped energy among younger New Yorkers. We’re doing our best to plug into that. The other groups fighting for safe streets don’t have activities that appeal in the same way. We know social media, we can try all these new angles, and, statistically, we’re most at risk, so it’s close to home. Have you always wanted to get involved in community activism? Yes, but really, I saw a need with this, so I did something. I started things, and now I’m not going to stop any time soon. And it excites me. Each time I have to host a meeting, it excites me. I love seeing new faces, meeting new people, having new opportunities to make changes.

What’s it like working with T.A.? I’ve worked with Caroline Samponaro [T.A.’s Deputy Director] a lot. She has helped me plan and set goals and the whole organization has been really helpful. If you had five minutes to talk to Mayor de Blasio, what would you tell him? I’d tell him about the Vision Zero Youth Council: That there’s a group of kids who want changes to their streets and who feel the threat of dangerous traffic. I’d tell him how much support Vision Zero has, not just from older adults and advocates but from the kids who are most at risk.

Reclaim Magazine is a quarterly publication sent only to T.A. members. If you're serious about biking, walking and sensible transportation in New York City, you don't want to miss a single issue of Reclaim. 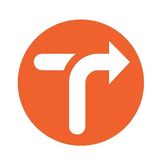