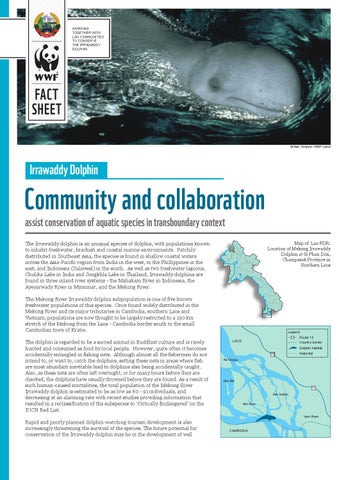 WORKING TOGETHER WITH LAO COMMUNITIES TO CONSERVE THE IRRAWADDY DOLPHIN

The Irrawaddy dolphin is an unusual species of dolphin, with populations known to inhabit freshwater, brackish and coastal marine environments. Patchily distributed in Southeast Asia, the species is found in shallow coastal waters across the Asia-Pacific region from India in the west, to the Phillippines in the east, and Indonesia (Sulawesl) in the south. As well as two freshwater lagoons, Chulika Lake in India and Songkhla Lake in Thailand, Irrawaddy dolphins are found in three inland river systems - the Mahakam River in Indonesia, the Ayeyarwady River in Myanmar, and the Mekong River. The Mekong River Irrawaddy dolphin subpopulation is one of five known freshwater populations of this species. Once found widely distributed in the Mekong River and its major tributaries in Cambodia, southern Laos and Vietnam, populations are now thought to be largely restricted to a 190 km stretch of the Mekong from the Laos - Cambodia border south to the small Cambodian town of Kratie. The dolphin is regarded to be a sacred animal in Buddhist culture and is rarely hunted and consumed as food by local people. However, quite often it becomes accidentally entangled in fishing nets. Although almost all the fishermen do not intend to, or want to, catch the dolphins, setting these nets in areas where fish are most abundant inevitable lead to dolphins also being accidentally caught. Also, as these nets are often left overnight, or for many hours before they are checked, the dolphins have usually drowned before they are found. As a result of such human-caused mortalities, the total population of the Mekong River Irrawaddy dolphin is estimated to be as low as 80 - 91 individuals, and decreasing at an alarming rate with recent studies providing information that resulted in a reclassification of the subspecies to ‘Critically Endangered’ on the IUCN Red List.

Rapid and poorly planned dolphin-watching tourism development is also increasingly threatening the survival of the species. The future potential for conservation of the Irrawaddy dolphin may lie in the development of well 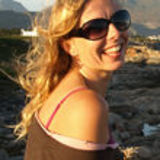