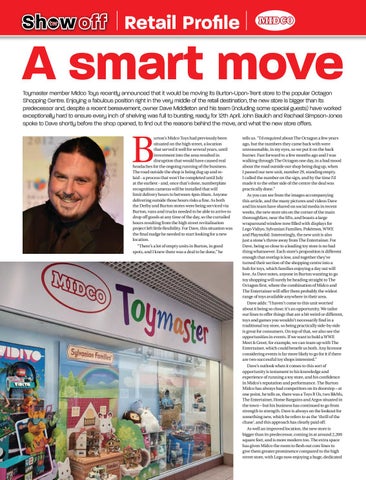 A smart move Toymaster member Midco Toys recently announced that it would be moving its Burton-Upon-Trent store to the popular Octagon Shopping Centre. Enjoying a fabulous position right in the very middle of the retail destination, the new store is bigger than its predecessor and, despite a recent bereavement, owner Dave Middleton and his team (including some special guests) have worked exceptionally hard to ensure every inch of shelving was full to bursting, ready for 12th April. John Baulch and Rachael Simpson-Jones spoke to Dave shortly before the shop opened, to find out the reasons behind the move, and what the new store offers.

urton’s Midco Toys had previously been situated on the high street, a location that served it well for several years, until investment into the area resulted in disruption that would have caused real headaches for the ongoing running of the business. The road outside the shop is being dug up and relaid - a process that won’t be completed until July at the earliest - and, once that’s done, numberplate recognition cameras will be installed that will limit delivery hours to between 4pm-10am. Anyone delivering outside those hours risks a fine. As both the Derby and Burton stores were being serviced via Burton, vans and trucks needed to be able to arrive to drop off goods at any time of the day, so the curtailed hours resulting from the high street revitalisation project left little flexibility. For Dave, this situation was the final nudge he needed to start looking for a new location. “There’s a lot of empty units in Burton, in good spots, and I knew there was a deal to be done,” he

tells us. “I’d enquired about The Octagon a few years ago, but the numbers they came back with were unreasonable, in my eyes, so we put it on the back burner. Fast forward to a few months ago and I was walking through The Octagon one day, in a bad mood about the road outside our shop being dug up, when I passed our new unit, number 29, standing empty. I called the number on the sign, and by the time I’d made it to the other side of the centre the deal was practically done.” As you can see from the images accompanying this article, and the many pictures and videos Dave and his team have shared on social media in recent weeks, the new store sits on the corner of the main thoroughfare, near the lifts, and boasts a large wraparound window now filled with displays for Lego Vidiyo, Sylvanian Families, Pokémon, WWE and Playmobil. Interestingly, the new unit is also just a stone’s throw away from The Entertainer. For Dave, being so close to a leading toy store is no bad thing whatsoever. Each store’s proposition is different enough that overlap is low, and together they’ve turned their section of the shopping centre into a hub for toys, which families enjoying a day out will love. As Dave notes, anyone in Burton wanting to go toy shopping will surely be heading straight to The Octagon first, where the combination of Midco and The Entertainer will offer them probably the widest range of toys available anywhere in their area. Dave adds: “I haven’t come to this unit worried about it being so close; it’s an opportunity. We tailor our lines to offer things that are a bit weird or different, toys and games you wouldn’t necessarily find in a traditional toy store, so being practically side-by-side is great for consumers. On top of that, we also see the opportunities in events. If we want to hold a WWE Meet & Greet, for example, we can team up with The Entertainer, which could benefit us both. Any licensor considering events is far more likely to go for it if there are two successful toy shops interested.” Dave’s outlook when it comes to this sort of opportunity is testament to his knowledge and experience of running a toy store, and his confidence in Midco’s reputation and performance. The Burton Midco has always had competitors on its doorstep – at one point, he tells us, there was a Toys R Us, two B&Ms, The Entertainer, Home Bargains and Argos situated in the town – but his business has continued to go from strength to strength. Dave is always on the lookout for something new, which he refers to as the ‘thrill of the chase’, and this approach has clearly paid off. As well an improved location, the new store is bigger than its predecessor, coming in at around 2,200 square feet, and is more modern too. The extra space has given Midco the room to flesh out core lines to give them greater prominence compared to the high street store, with Lego now enjoying a huge, dedicated