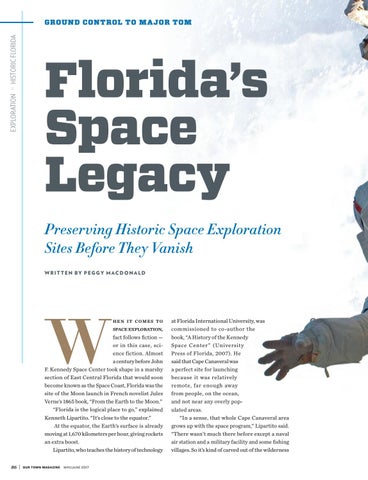 hen it comes to space exploration, n, fact follows ﬁction — or in this case, scicience fiction. Almost st a century before John hn F. Kennedy Space Center took shape in a marshy hy section of East Central Florida that would soon on become known as the Space Coast, Florida was the he site of the Moon launch in French novelist Jules es Verne’s 1865 book, “From the Earth to the Moon.” n.” “Florida is the logical place to go,” explained ed Kenneth Lipartito. “It’s close to the equator.” At the equator, the Earth’s surface is already dy moving at 1,670 kilometers per hour, giving rockets ts an extra boost. Lipartito, who teaches the history of technology gy 86 |

at Florida International University, was commissioned to co-author the book, “A History of the Kennedy Space Center” (University Press of Florida, 2007). He said that Cape Canaveral was a perfect site for launching because it was relatively remote, far enough away from people, on the ocean, and not near any overly populated areas. “In a sense, that whole Cape Canaveral area grows up with the space program,” Lipartito said. “There wasn’t much there before except a naval air station and a military facility and some ﬁshing villages. So it’s kind of carved out of the wilderness