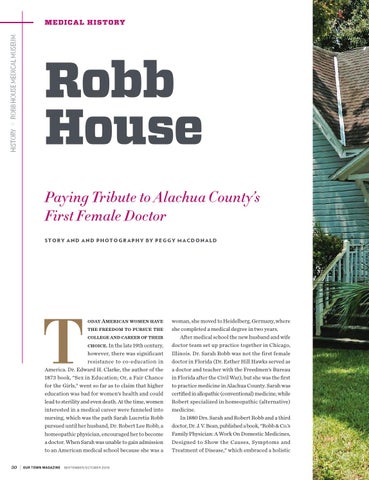 oday American women have the freedom to pursue the college and career of their choice. In the late 19th century, however, there was significant resistance to co-education in America. Dr. Edward H. Clarke, the author of the 1873 book, “Sex in Education; Or, a Fair Chance for the Girls,” went so far as to claim that higher education was bad for women’s health and could lead to sterility and even death. At the time, women interested in a medical career were funneled into nursing, which was the path Sarah Lucretia Robb pursued until her husband, Dr. Robert Lee Robb, a homeopathic physician, encouraged her to become a doctor. When Sarah was unable to gain admission to an American medical school because she was a

woman, she moved to Heidelberg, Germany, where she completed a medical degree in two years. After medical school the new husband and wife doctor team set up practice together in Chicago, Illinois. Dr. Sarah Robb was not the first female doctor in Florida (Dr. Esther Hill Hawks served as a doctor and teacher with the Freedmen’s Bureau in Florida after the Civil War), but she was the ﬁrst to practice medicine in Alachua County. Sarah was certiﬁed in allopathic (conventional) medicine, while Robert specialized in homeopathic (alternative) medicine. In 1880 Drs. Sarah and Robert Robb and a third doctor, Dr. J. V. Bean, published a book, “Robb &amp; Co.’s Family Physician: A Work On Domestic Medicines, Designed to Show the Causes, Symptoms and Treatment of Disease,” which embraced a holistic