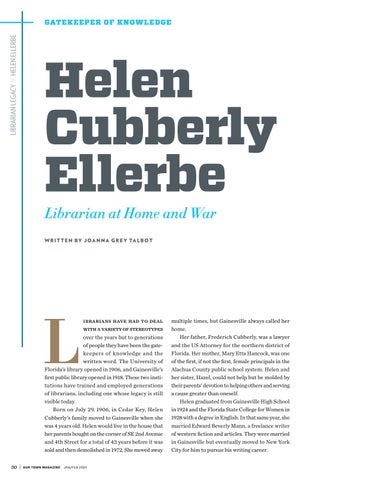 ibrarians have had to deal with a variety of stereotypes over the years but to generations of people they have been the gatekeepers of knowledge and the written word. The University of Florida’s library opened in 1906, and Gainesville’s first public library opened in 1918. These two institutions have trained and employed generations of librarians, including one whose legacy is still visible today. Born on July 29, 1906, in Cedar Key, Helen Cubberly’s family moved to Gainesville when she was 4 years old. Helen would live in the house that her parents bought on the corner of SE 2nd Avenue and 4th Street for a total of 42 years before it was sold and then demolished in 1972. She moved away

multiple times, but Gainesville always called her home. Her father, Frederich Cubberly, was a lawyer and the US Attorney for the northern district of Florida. Her mother, Mary Etta Hancock, was one of the first, if not the first, female principals in the Alachua County public school system. Helen and her sister, Hazel, could not help but be molded by their parents’ devotion to helping others and serving a cause greater than oneself. Helen graduated from Gainesville High School in 1924 and the Florida State College for Women in 1928 with a degree in English. In that same year, she married Edward Beverly Mann, a freelance writer of western fiction and articles. They were married in Gainesville but eventually moved to New York City for him to pursue his writing career.