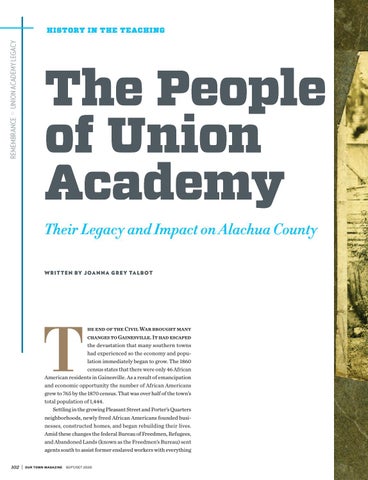 HISTORY IN THE TEACHING

he end of the Civil War brought many changes to Gainesville. It had escaped the devastation that many southern towns had experienced so the economy and population immediately began to grow. The 1860 census states that there were only 46 African American residents in Gainesville. As a result of emancipation and economic opportunity the number of African Americans grew to 765 by the 1870 census. That was over half of the town’s total population of 1,444. Settling in the growing Pleasant Street and Porter’s Quarters neighborhoods, newly freed African Americans founded businesses, constructed homes, and began rebuilding their lives. Amid these changes the federal Bureau of Freedmen, Refugees, and Abandoned Lands (known as the Freedmen’s Bureau) sent agents south to assist former enslaved workers with everything