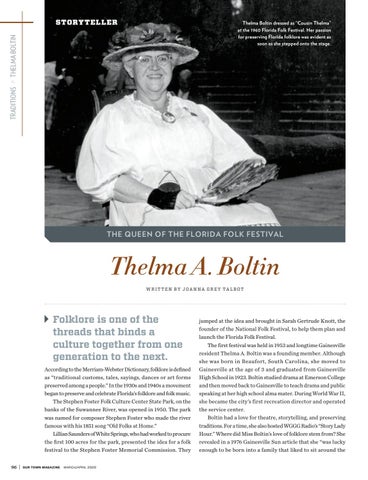 Thelma Boltin dressed as “Cousin Thelma” at the 1960 Florida Folk Festival. Her passion for preserving Florida folklore was evident as soon as she stepped onto the stage.

THE QUEEN OF THE FLORIDA FOLK FESTIVAL

Folklore is one of the threads that binds a culture together from one generation to the next. According to the Merriam-Webster Dictionary, folklore is defined as “traditional customs, tales, sayings, dances or art forms preserved among a people.” In the 1930s and 1940s a movement began to preserve and celebrate Florida’s folklore and folk music. The Stephen Foster Folk Culture Center State Park, on the banks of the Suwannee River, was opened in 1950. The park was named for composer Stephen Foster who made the river famous with his 1851 song “Old Folks at Home.” Lillian Saunders of White Springs, who had worked to procure the first 100 acres for the park, presented the idea for a folk festival to the Stephen Foster Memorial Commission. They 96 |

jumped at the idea and brought in Sarah Gertrude Knott, the founder of the National Folk Festival, to help them plan and launch the Florida Folk Festival. The first festival was held in 1953 and longtime Gainesville resident Thelma A. Boltin was a founding member. Although she was born in Beaufort, South Carolina, she moved to Gainesville at the age of 3 and graduated from Gainesville High School in 1923. Boltin studied drama at Emerson College and then moved back to Gainesville to teach drama and public speaking at her high school alma mater. During World War II, she became the city’s first recreation director and operated the service center. Boltin had a love for theatre, storytelling, and preserving traditions. For a time, she also hosted WGGG Radio’s “Story Lady Hour.” Where did Miss Boltin’s love of folklore stem from? She revealed in a 1976 Gainesville Sun article that she “was lucky enough to be born into a family that liked to sit around the