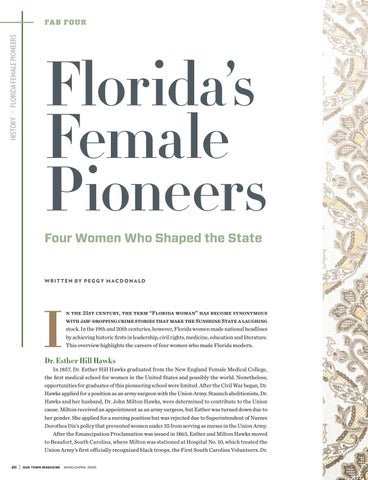 n the 21st century, the term “Florida woman” has become synonymous with jaw-dropping crime stories that make the Sunshine State a laughing stock. In the 19th and 20th centuries, however, Florida women made national headlines by achieving historic firsts in leadership, civil rights, medicine, education and literature. This overview highlights the careers of four women who made Florida modern.

Dr. Esther Hill Hawks In 1857, Dr. Esther Hill Hawks graduated from the New England Female Medical College, the first medical school for women in the United States and possibly the world. Nonetheless, opportunities for graduates of this pioneering school were limited. After the Civil War began, Dr. Hawks applied for a position as an army surgeon with the Union Army. Staunch abolitionists, Dr. Hawks and her husband, Dr. John Milton Hawks, were determined to contribute to the Union cause. Milton received an appointment as an army surgeon, but Esther was turned down due to her gender. She applied for a nursing position but was rejected due to Superintendent of Nurses Dorothea Dix’s policy that prevented women under 35 from serving as nurses in the Union Army. After the Emancipation Proclamation was issued in 1863, Esther and Milton Hawks moved to Beaufort, South Carolina, where Milton was stationed at Hospital No. 10, which treated the Union Army’s first officially recognized black troops, the First South Carolina Volunteers. Dr.