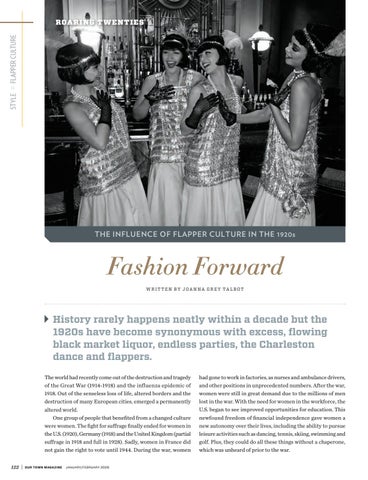 THE INFLUENCE OF FLAPPER CULTURE IN THE 1920s

History rarely happens neatly within a decade but the 1920s have become synonymous with excess, flowing black market liquor, endless parties, the Charleston dance and flappers. The world had recently come out of the destruction and tragedy of the Great War (1914-1918) and the influenza epidemic of 1918. Out of the senseless loss of life, altered borders and the destruction of many European cities, emerged a permanently altered world. One group of people that benefited from a changed culture were women. The fight for suffrage finally ended for women in the U.S. (1920), Germany (1918) and the United Kingdom (partial suffrage in 1918 and full in 1928). Sadly, women in France did not gain the right to vote until 1944. During the war, women 122 |

had gone to work in factories, as nurses and ambulance drivers, and other positions in unprecedented numbers. After the war, women were still in great demand due to the millions of men lost in the war. With the need for women in the workforce, the U.S. began to see improved opportunities for education. This newfound freedom of financial independence gave women a new autonomy over their lives, including the ability to pursue leisure activities such as dancing, tennis, skiing, swimming and golf. Plus, they could do all these things without a chaperone, which was unheard of prior to the war.

IN THIS ISSUE >> we invite you to Lindy hop your way into a new decade. learn about a local swing dancing club as well as a family whose vision for 2020 is all about spreading kindness and service around the globe. Get ready to make your dreams come true this year. the roaring twenty-twenties are calling your name!