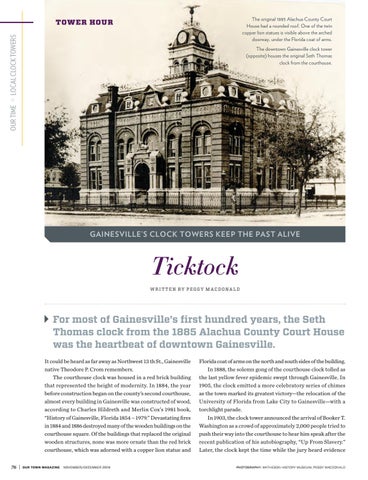 The original 1885 Alachua County Court House had a rounded roof. One of the twin copper lion statues is visible above the arched doorway, under the Florida coat of arms.

The downtown Gainesville clock tower (opposite) houses the original Seth Thomas clock from the courthouse.

For most of Gainesville’s first hundred years, the Seth Thomas clock from the 1885 Alachua County Court House was the heartbeat of downtown Gainesville. It could be heard as far away as Northwest 13 th St., Gainesville native Theodore P. Crom remembers. The courthouse clock was housed in a red brick building that represented the height of modernity. In 1884, the year before construction began on the county’s second courthouse, almost every building in Gainesville was constructed of wood, according to Charles Hildreth and Merlin Cox’s 1981 book, “History of Gainesville, Florida 1854 – 1979.” Devastating fires in 1884 and 1886 destroyed many of the wooden buildings on the courthouse square. Of the buildings that replaced the original wooden structures, none was more ornate than the red brick courthouse, which was adorned with a copper lion statue and 76 |

Florida coat of arms on the north and south sides of the building. In 1888, the solemn gong of the courthouse clock tolled as the last yellow fever epidemic swept through Gainesville. In 1905, the clock emitted a more celebratory series of chimes as the town marked its greatest victory—the relocation of the University of Florida from Lake City to Gainesville—with a torchlight parade. In 1903, the clock tower announced the arrival of Booker T. Washington as a crowd of approximately 2,000 people tried to push their way into the courthouse to hear him speak after the recent publication of his autobiography, “Up From Slavery.” Later, the clock kept the time while the jury heard evidence PHOTOGRAPHY: MATHESON HISTORY MUSEUM, PEGGY MACDONALD

IN THIS ISSUE >> Let’s turn back the clock, pause and slow-mo all of the precious moments life brings us. Delve into the history of local clock towers, and how each minute is a chance to make a memory that just might last a lifetime. (Photography by Ronelva wonders | Illustration by Hank McAfee).