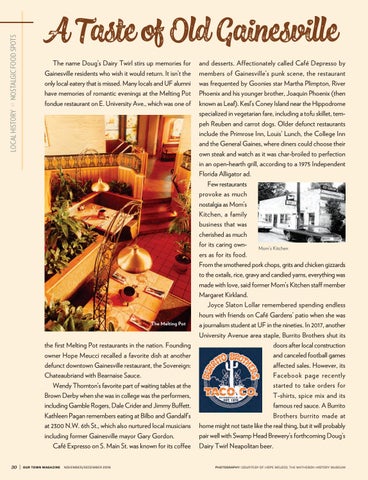 A Taste of Old Gainesville The name Doug’s Dairy Twirl stirs up memories for Gainesville residents who wish it would return. It isn’t the only local eatery that is missed. Many locals and UF alumni have memories of romantic evenings at the Melting Pot fondue restaurant on E. University Ave., which was one of

the first Melting Pot restaurants in the nation. Founding owner Hope Meucci recalled a favorite dish at another defunct downtown Gainesville restaurant, the Sovereign: Chateaubriand with Bearnaise Sauce. Wendy Thornton’s favorite part of waiting tables at the Brown Derby when she was in college was the performers, including Gamble Rogers, Dale Crider and Jimmy Buffett. Kathleen Pagan remembers eating at Bilbo and Gandalf’s at 2300 N.W. 6th St., which also nurtured local musicians including former Gainesville mayor Gary Gordon. Café Expresso on S. Main St. was known for its coffee 30 |

and desserts. Affectionately called Café Depresso by members of Gainesville’s punk scene, the restaurant was frequented by Goonies star Martha Plimpton, River Phoenix and his younger brother, Joaquin Phoenix (then known as Leaf). Kesl’s Coney Island near the Hippodrome specialized in vegetarian fare, including a tofu skillet, tempeh Reuben and carrot dogs. Older defunct restaurants include the Primrose Inn, Louis’ Lunch, the College Inn and the General Gaines, where diners could choose their own steak and watch as it was char-broiled to perfection in an open-hearth grill, according to a 1975 Independent Florida Alligator ad. Few restaurants provoke as much nostalgia as Mom’s Kitchen, a family business that was cherished as much for its caring ownMom’s Kitchen ers as for its food. From the smothered pork chops, grits and chicken gizzards to the oxtails, rice, gravy and candied yams, everything was made with love, said former Mom’s Kitchen staff member Margaret Kirkland. Joyce Slaton Lollar remembered spending endless hours with friends on Café Gardens’ patio when she was a journalism student at UF in the nineties. In 2017, another University Avenue area staple, Burrito Brothers shut its doors after local construction and canceled football games affected sales. However, its Facebook page recently started to take orders for T-shirts, spice mix and its famous red sauce. A Burrito Brothers burrito made at home might not taste like the real thing, but it will probably pair well with Swamp Head Brewery’s forthcoming Doug’s Dairy Twirl Neapolitan beer. PHOTOGRAPHY: COURTESY OF HOPE MEUCCI; THE MATHESON HISTORY MUSEUM

IN THIS ISSUE >> Let’s turn back the clock, pause and slow-mo all of the precious moments life brings us. Delve into the history of local clock towers, and how each minute is a chance to make a memory that just might last a lifetime. (Photography by Ronelva wonders | Illustration by Hank McAfee).