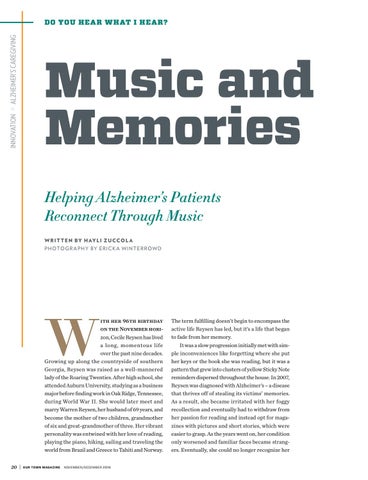 DO YOU HEAR WHAT I HEAR?

ith her 96th birthday on the November horizon, Cecile Reysen has lived a long, momentous life over the past nine decades. Growing up along the countryside of southern Georgia, Reysen was raised as a well-mannered lady of the Roaring Twenties. After high school, she attended Auburn University, studying as a business major before finding work in Oak Ridge, Tennessee, during World War II. She would later meet and marry Warren Reysen, her husband of 69 years, and become the mother of two children, grandmother of six and great-grandmother of three. Her vibrant personality was entwined with her love of reading, playing the piano, hiking, sailing and traveling the world from Brazil and Greece to Tahiti and Norway. 20 |

The term fulfilling doesn’t begin to encompass the active life Reysen has led, but it’s a life that began to fade from her memory. It was a slow progression initially met with simple inconveniences like forgetting where she put her keys or the book she was reading, but it was a pattern that grew into clusters of yellow Sticky Note reminders dispersed throughout the house. In 2007, Reysen was diagnosed with Alzheimer’s – a disease that thrives off of stealing its victims’ memories. As a result, she became irritated with her foggy recollection and eventually had to withdraw from her passion for reading and instead opt for magazines with pictures and short stories, which were easier to grasp. As the years went on, her condition only worsened and familiar faces became strangers. Eventually, she could no longer recognize her

IN THIS ISSUE >> Let’s turn back the clock, pause and slow-mo all of the precious moments life brings us. Delve into the history of local cl...

IN THIS ISSUE >> Let’s turn back the clock, pause and slow-mo all of the precious moments life brings us. Delve into the history of local cl...