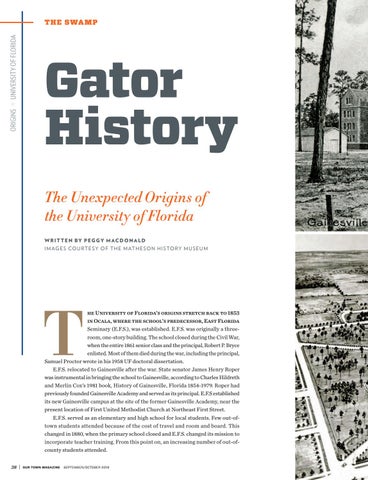 he University of Florida’s origins stretch back to 1853 in Ocala, where the school’s predecessor, East Florida Seminary (E.F.S.), was established. E.F.S. was originally a threeroom, one-story building. The school closed during the Civil War, when the entire 1861 senior class and the principal, Robert P. Bryce enlisted. Most of them died during the war, including the principal, Samuel Proctor wrote in his 1958 UF doctoral dissertation. E.F.S. relocated to Gainesville after the war. State senator James Henry Roper was instrumental in bringing the school to Gainesville, according to Charles Hildreth and Merlin Cox’s 1981 book, History of Gainesville, Florida 1854-1979. Roper had previously founded Gainesville Academy and served as its principal. E.F.S established its new Gainesville campus at the site of the former Gainesville Academy, near the present location of First United Methodist Church at Northeast First Street. E.F.S. served as an elementary and high school for local students. Few out-oftown students attended because of the cost of travel and room and board. This changed in 1880, when the primary school closed and E.F.S. changed its mission to incorporate teacher training. From this point on, an increasing number of out-ofcounty students attended.

In This Issue >> We invite you to thank a teacher! learn about some of the wonderful educators in our community, and how their passion for teaching is inspiring generations to come. study tips and so much more — it’s time to hit those books!