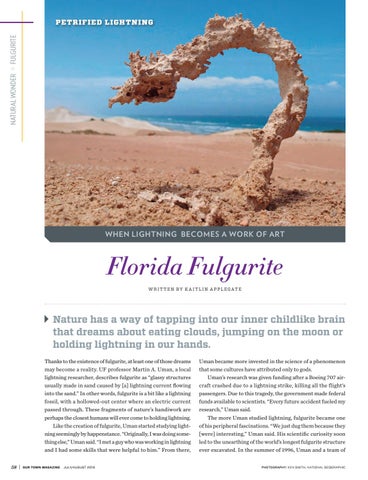 WHEN LIGHTNING BECOMES A WORK OF ART

Nature has a way of tapping into our inner childlike brain that dreams about eating clouds, jumping on the moon or holding lightning in our hands. Thanks to the existence of fulgurite, at least one of those dreams may become a reality. UF professor Martin A. Uman, a local lightning researcher, describes fulgurite as “glassy structures usually made in sand caused by [a] lightning current flowing into the sand.” In other words, fulgurite is a bit like a lightning fossil, with a hollowed-out center where an electric current passed through. These fragments of nature’s handiwork are perhaps the closest humans will ever come to holding lightning. Like the creation of fulgurite, Uman started studying lightning seemingly by happenstance. “Originally, I was doing something else,” Uman said. “I met a guy who was working in lightning and I had some skills that were helpful to him.” From there, 58 |

Uman became more invested in the science of a phenomenon that some cultures have attributed only to gods. Uman’s research was given funding after a Boeing 707 aircraft crashed due to a lightning strike, killing all the flight’s passengers. Due to this tragedy, the government made federal funds available to scientists. “Every future accident fueled my research,” Uman said. The more Uman studied lightning, fulgurite became one of his peripheral fascinations. “We just dug them because they [were] interesting,” Uman said. His scientific curiosity soon led to the unearthing of the world’s longest fulgurite structure ever excavated. In the summer of 1996, Uman and a team of PHOTOGRAPHY: KEN SMITH, NATIONAL GEOGRAPHIC