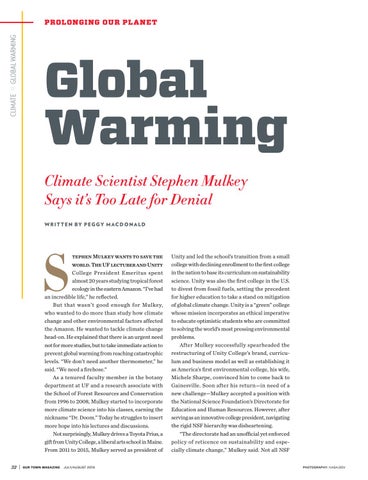 tephen Mulkey wants to save the world. The UF lecturer and Unity College President Emeritus spent almost 20 years studying tropical forest ecology in the eastern Amazon. “I’ve had an incredible life,” he reflected. But that wasn’t good enough for Mulkey, who wanted to do more than study how climate change and other environmental factors affected the Amazon. He wanted to tackle climate change head-on. He explained that there is an urgent need not for more studies, but to take immediate action to prevent global warming from reaching catastrophic levels. “We don’t need another thermometer,” he said. “We need a firehose.” As a tenured faculty member in the botany department at UF and a research associate with the School of Forest Resources and Conservation from 1996 to 2008, Mulkey started to incorporate more climate science into his classes, earning the nickname “Dr. Doom.” Today he struggles to insert more hope into his lectures and discussions. Not surprisingly, Mulkey drives a Toyota Prius, a gift from Unity College, a liberal arts school in Maine. From 2011 to 2015, Mulkey served as president of

Unity and led the school’s transition from a small college with declining enrollment to the first college in the nation to base its curriculum on sustainability science. Unity was also the first college in the U.S. to divest from fossil fuels, setting the precedent for higher education to take a stand on mitigation of global climate change. Unity is a “green” college whose mission incorporates an ethical imperative to educate optimistic students who are committed to solving the world’s most pressing environmental problems. After Mulkey successfully spearheaded the restructuring of Unity College’s brand, curriculum and business model as well as establishing it as America’s first environmental college, his wife, Michele Sharpe, convinced him to come back to Gainesville. Soon after his return—in need of a new challenge—Mulkey accepted a position with the National Science Foundation’s Directorate for Education and Human Resources. However, after serving as an innovative college president, navigating the rigid NSF hierarchy was disheartening. “The directorate had an unofficial yet enforced policy of reticence on sustainability and especially climate change,” Mulkey said. Not all NSF PHOTOGRAPHY: NASA.GOV