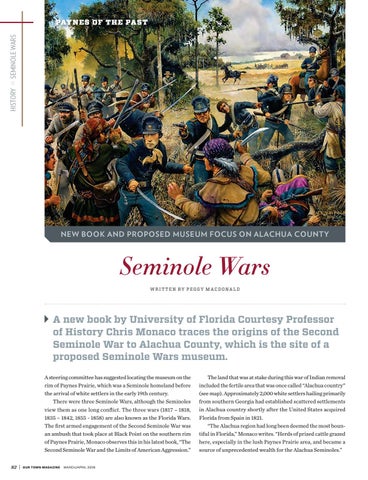 PAYNES OF THE PAST

A new book by University of Florida Courtesy Professor of History Chris Monaco traces the origins of the Second Seminole War to Alachua County, which is the site of a proposed Seminole Wars museum. A steering committee has suggested locating the museum on the rim of Paynes Prairie, which was a Seminole homeland before the arrival of white settlers in the early 19th century. There were three Seminole Wars, although the Seminoles view them as one long conﬂict. The three wars (1817 – 1818, 1835 – 1842, 1855 - 1858) are also known as the Florida Wars. The ﬁrst armed engagement of the Second Seminole War was an ambush that took place at Black Point on the southern rim of Paynes Prairie, Monaco observes this in his latest book, “The Second Seminole War and the Limits of American Aggression.” 82 |

The land that was at stake during this war of Indian removal included the fertile area that was once called “Alachua country” (see map). Approximately 2,000 white settlers hailing primarily from southern Georgia had established scattered settlements in Alachua country shortly after the United States acquired Florida from Spain in 1821. “The Alachua region had long been deemed the most bountiful in Florida,” Monaco writes. “Herds of prized cattle grazed here, especially in the lush Paynes Prairie area, and became a source of unprecedented wealth for the Alachua Seminoles.”

We encourage you to connect with the Great Outdoors. Enjoy a local birding field guide while also learning about the Alachua Audubon Society. From tips on chaos-free camping to an update on the return of Alachua Lake, there’s something for every adventurer to explore. Here’s to breathing it all in! (photo by Michael A. Eaddy)