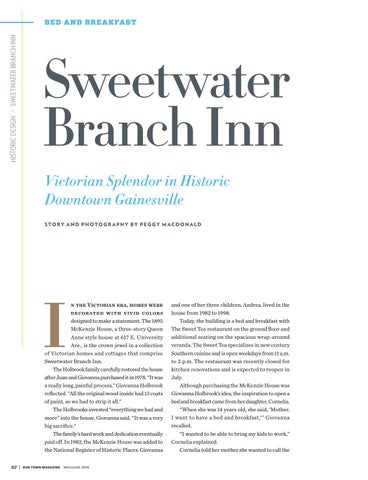 n the Victorian era, homes were decorated with vivid colors designed to make a statement. The 1895 McKenzie House, a three-story Queen Anne style house at 617 E. University Ave., is the crown jewel in a collection of Victorian homes and cottages that comprise Sweetwater Branch Inn. The Holbrook family carefully restored the house after Juan and Giovanna purchased it in 1978. “It was a really long, painful process,” Giovanna Holbrook reﬂected. “All the original wood inside had 13 coats of paint, so we had to strip it all.” The Holbrooks invested “everything we had and more” into the house, Giovanna said. “It was a very big sacriﬁce.” The family’s hard work and dedication eventually paid off. In 1982, the McKenzie House was added to the National Register of Historic Places. Giovanna

and one of her three children, Andrea, lived in the house from 1982 to 1998. Today, the building is a bed and breakfast with The Sweet Tea restaurant on the ground ﬂoor and additional seating on the spacious wrap-around veranda. The Sweet Tea specializes in new century Southern cuisine and is open weekdays from 11 a.m. to 2 p.m. The restaurant was recently closed for kitchen renovations and is expected to reopen in July. Although purchasing the McKenzie House was Giovanna Holbrook’s idea, the inspiration to open a bed and breakfast came from her daughter, Cornelia. “When she was 14 years old, she said, ‘Mother, I want to have a bed and breakfast,’” Giovanna recalled. “I wanted to be able to bring my kids to work,” Cornelia explained. Cornelia told her mother she wanted to call the

Add a little color to your life!