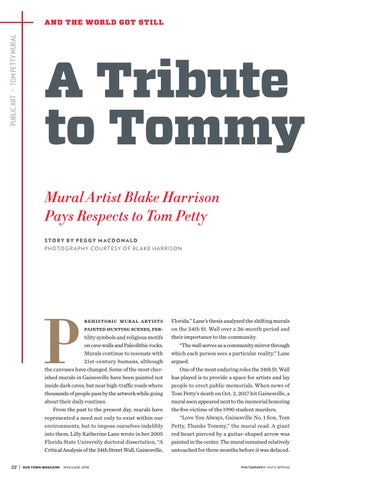 AND THE WORLD GOT STILL

rehistoric mural artists painted hunting scenes, fertility symbols and religious motifs on cave walls and Paleolithic rocks. Murals continue to resonate with 21st-century humans, although the canvases have changed. Some of the most cherished murals in Gainesville have been painted not inside dark caves, but near high-trafﬁc roads where thousands of people pass by the artwork while going about their daily routines. From the past to the present day, murals have represented a need not only to exist within our environments, but to impose ourselves indelibly into them, Lilly Katherine Lane wrote in her 2005 Florida State University doctoral dissertation, “A Critical Analysis of the 34th Street Wall, Gainesville,

Florida.” Lane’s thesis analyzed the shifting murals on the 34th St. Wall over a 26-month period and their importance to the community. “The wall serves as a community mirror through which each person sees a particular reality,” Lane argued. One of the most enduring roles the 34th St. Wall has played is to provide a space for artists and lay people to erect public memorials. When news of Tom Petty’s death on Oct. 2, 2017 hit Gainesville, a mural soon appeared next to the memorial honoring the ﬁve victims of the 1990 student murders. “Love You Always, Gainesville No. 1 Son, Tom Petty, Thanks Tommy,” the mural read. A giant red heart pierced by a guitar-shaped arrow was painted in the center. The mural remained relatively untouched for three months before it was defaced. PHOTOGRAPHY: ANITA SPRING

Add a little color to your life!