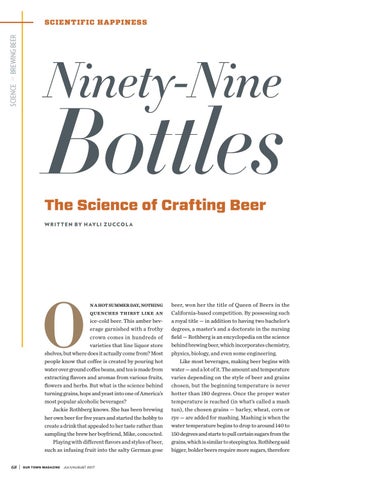 n a hot summer day, nothing quenches thirst like an ice-cold beer. This amber beverage garnished with a frothy crown comes in hundreds of varieties that line liquor store shelves, but where does it actually come from? Most people know that coffee is created by pouring hot water over ground coffee beans, and tea is made from extracting ﬂavors and aromas from various fruits, ﬂowers and herbs. But what is the science behind turning grains, hops and yeast into one of America’s most popular alcoholic beverages? Jackie Rothberg knows. She has been brewing her own beer for ﬁve years and started the hobby to create a drink that appealed to her taste rather than sampling the brew her boyfriend, Mike, concocted. Playing with different ﬂavors and styles of beer, such as infusing fruit into the salty German gose

beer, won her the title of Queen of Beers in the California-based competition. By possessing such a royal title — in addition to having two bachelor’s degrees, a master’s and a doctorate in the nursing ﬁeld — Rothberg is an encyclopedia on the science behind brewing beer, which incorporates chemistry, physics, biology, and even some engineering. Like most beverages, making beer begins with water — and a lot of it. The amount and temperature varies depending on the style of beer and grains chosen, but the beginning temperature is never hotter than 180 degrees. Once the proper water temperature is reached (in what’s called a mash tun), the chosen grains — barley, wheat, corn or rye — are added for mashing. Mashing is when the water temperature begins to drop to around 140 to 150 degrees and starts to pull certain sugars from the grains, which is similar to steeping tea. Rothberg said bigger, bolder beers require more sugars, therefore