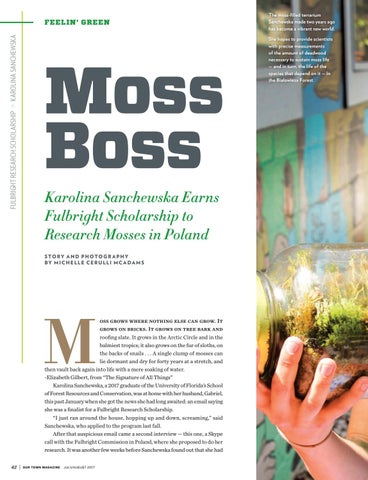 oss grows where nothing else can grow. It grows on bricks. It grows on tree bark and rooﬁng slate. It grows in the Arctic Circle and in the balmiest tropics; it also grows on the fur of sloths, on the backs of snails . . . A single clump of mosses can lie dormant and dry for forty years at a stretch, and then vault back again into life with a mere soaking of water. -Elizabeth Gilbert, from “The Signature of All Things” Karolina Sanchewska, a 2017 graduate of the University of Florida’s School of Forest Resources and Conservation, was at home with her husband, Gabriel, this past January when she got the news she had long awaited: an email saying she was a ﬁnalist for a Fulbright Research Scholarship. “I just ran around the house, hopping up and down, screaming,” said Sanchewska, who applied to the program last fall. After that auspicious email came a second interview — this one, a Skype call with the Fulbright Commission in Poland, where she proposed to do her research. It was another few weeks before Sanchewska found out that she had

The moss-filled terrarium Sanchewska made two years ago has become a vibrant new world. She hopes to provide scientists with precise measurements of the amount of deadwood necessary to sustain moss life — and in turn, the life of the species that depend on it — in the Bialowieza Forest.