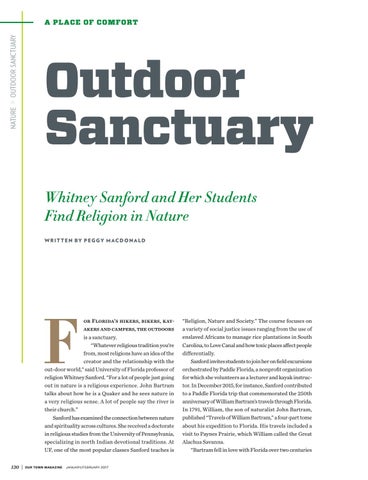 A PLACE OF COMFORT

or Florida’s hikers, bikers, kayakers and campers, the outdoors is a sanctuary. “Whatever religious tradition you’re from, most religions have an idea of the creator and the relationship with the out-door world,” said University of Florida professor of religion Whitney Sanford. “For a lot of people just going out in nature is a religious experience. John Bartram talks about how he is a Quaker and he sees nature in a very religious sense. A lot of people say the river is their church.” Sanford has examined the connection between nature and spirituality across cultures. She received a doctorate in religious studies from the University of Pennsylvania, specializing in north Indian devotional traditions. At UF, one of the most popular classes Sanford teaches is

“Religion, Nature and Society.” The course focuses on a variety of social justice issues ranging from the use of enslaved Africans to manage rice plantations in South Carolina, to Love Canal and how toxic places affect people differentially. Sanford invites students to join her on ﬁeld excursions orchestrated by Paddle Florida, a nonproﬁt organization for which she volunteers as a lecturer and kayak instructor. In December 2015, for instance, Sanford contributed to a Paddle Florida trip that commemorated the 250th anniversary of William Bartram’s travels through Florida. In 1791, William, the son of naturalist John Bartram, published “Travels of William Bartram,” a four-part tome about his expedition to Florida. His travels included a visit to Paynes Prairie, which William called the Great Alachua Savanna. “Bartram fell in love with Florida over two centuries