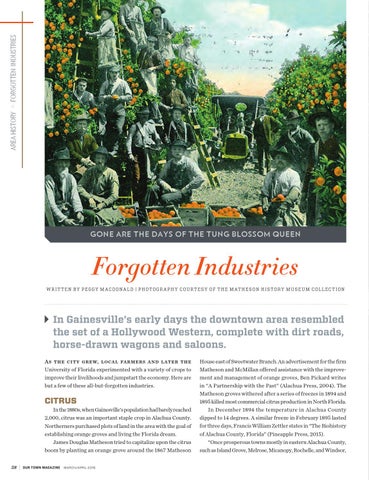 GONE ARE THE DAYS OF THE TUNG BLOSSOM QUEEN

In Gainesville’s early days the downtown area resembled the set of a Hollywood Western, complete with dirt roads, horse-drawn wagons and saloons. As the city grew, local farmers and later the University of Florida experimented with a variety of crops to improve their livelihoods and jumpstart the economy. Here are but a few of these all-but-forgotten industries.

CITRUS In the 1880s, when Gainesville’s population had barely reached 2,000, citrus was an important staple crop in Alachua County. Northerners purchased plots of land in the area with the goal of establishing orange groves and living the Florida dream. James Douglas Matheson tried to capitalize upon the citrus boom by planting an orange grove around the 1867 Matheson 58 |

House east of Sweetwater Branch. An advertisement for the firm Matheson and McMillan offered assistance with the improvement and management of orange groves, Ben Pickard writes in “A Partnership with the Past” (Alachua Press, 2004). The Matheson groves withered after a series of freezes in 1894 and 1895 killed most commercial citrus production in North Florida. In December 1894 the temperature in Alachua County dipped to 14 degrees. A similar freeze in February 1895 lasted for three days, Francis William Zettler states in “The Biohistory of Alachua County, Florida” (Pineapple Press, 2015). “Once prosperous towns mostly in eastern Alachua County, such as Island Grove, Melrose, Micanopy, Rochelle, and Windsor,