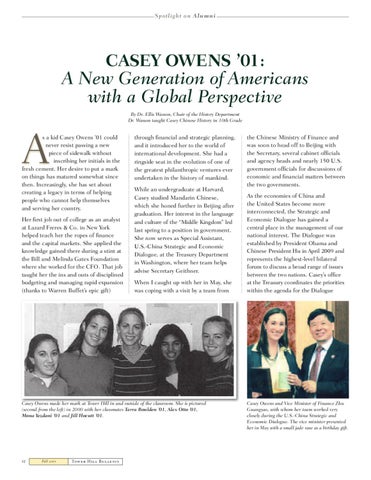 s a kid Casey Owens ’01 could never resist passing a new piece of sidewalk without inscribing her initials in the fresh cement. Her desire to put a mark on things has matured somewhat since then. Increasingly, she has set about creating a legacy in terms of helping people who cannot help themselves and serving her country. Her first job out of college as an analyst at Lazard Freres &amp; Co. in New York helped teach her the ropes of finance and the capital markets. She applied the knowledge gained there during a stint at the Bill and Melinda Gates Foundation where she worked for the CFO. That job taught her the ins and outs of disciplined budgeting and managing rapid expansion (thanks to Warren Buffet’s epic gift)

through financial and strategic planning, and it introduced her to the world of international development. She had a ringside seat in the evolution of one of the greatest philanthropic ventures ever undertaken in the history of mankind. While an undergraduate at Harvard, Casey studied Mandarin Chinese, which she honed further in Beijing after graduation. Her interest in the language and culture of the “Middle Kingdom” led last spring to a position in government. She now serves as Special Assistant, U.S.-China Strategic and Economic Dialogue, at the Treasury Department in Washington, where her team helps advise Secretary Geithner. When I caught up with her in May, she was coping with a visit by a team from

Casey Owens made her mark at Tower Hill in and outside of the classroom. She is pictured (second from the left) in 2000 with her classmates Tarra Boulden ’01, Alex Otto ’01, Mona Yezdani ’01 and Jill Hocutt ’01.

the Chinese Ministry of Finance and was soon to head off to Beijing with the Secretary, several cabinet officials and agency heads and nearly 150 U.S. government officials for discussions of economic and financial matters between the two governments. As the economies of China and the United States become more interconnected, the Strategic and Economic Dialogue has gained a central place in the management of our national interest. The Dialogue was established by President Obama and Chinese President Hu in April 2009 and represents the highest-level bilateral forum to discuss a broad range of issues between the two nations. Casey’s office at the Treasury coordinates the priorities within the agenda for the Dialogue

Casey Owens and Vice Minister of Finance Zhu Guangyao, with whom her team worked very closely during the U.S.-China Strategic and Economic Dialogue. The vice minister presented her in May with a small jade vase as a birthday gift. 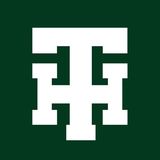