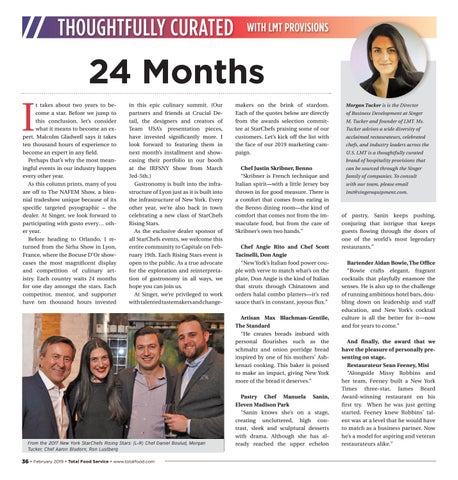 t takes about two years to become a star. Before we jump to this conclusion, let’s consider what it means to become an expert. Malcolm Gladwell says it takes ten thousand hours of experience to become an expert in any field. Perhaps that’s why the most meaningful events in our industry happen every other year. As this column prints, many of you are off to The NAFEM Show, a biennial tradeshow unique because of its specific targeted psyographic – the dealer. At Singer, we look forward to participating with gusto every… other year. Before heading to Orlando, I returned from the Sirha Show in Lyon, France, where the Bocuse D’Or showcases the most magnificent display and competition of culinary artistry. Each country waits 24 months for one day amongst the stars. Each competitor, mentor, and supporter have ten thousand hours invested

in this epic culinary summit. (Our partners and friends at Crucial Detail, the designers and creators of Team USA’s presentation pieces, have invested significantly more. I look forward to featuring them in next month’s installment and showcasing their portfolio in our booth at the IRFSNY Show from March 3rd-5th.) Gastronomy is built into the infrastructure of Lyon just as it is built into the infrastructure of New York. Every other year, we’re also back in town celebrating a new class of StarChefs Rising Stars. As the exclusive dealer sponsor of all StarChefs events, we welcome this entire community to Capitale on February 19th. Each Rising Stars event is open to the public. As a true advocate for the exploration and reinterpretation of gastronomy in all ways, we hope you can join us. At Singer, we’re privileged to work with talented tastemakers and change-

makers on the brink of stardom. Each of the quotes below are directly from the awards selection committee at StarChefs praising some of our customers. Let’s kick off the list with the face of our 2019 marketing campaign.

of Business Development at Singer M. Tucker and founder of LMT. Ms. Tucker advises a wide diversity of acclaimed restaurateurs, celebrated chefs, and industry leaders across the U.S. LMT is a thoughtfully curated brand of hospitality provisions that

Chef Justin Skribner, Benno “Skribner is French technique and Italian spirit—with a little Jersey boy thrown in for good measure. There is a comfort that comes from eating in the Benno dining room—the kind of comfort that comes not from the immaculate food, but from the care of Skribner’s own two hands.” Chef Angie Rito and Chef Scott Tacinelli, Don Angie “New York’s Italian food power couple with verve to match what’s on the plate, Don Angie is the kind of Italian that struts through Chinatown and orders halal combo platters—it’s red sauce that’s in constant, joyous flux.” Artisan Max Blachman-Gentile, The Standard “He creates breads imbued with personal flourishes such as the schmaltz and onion porridge bread inspired by one of his mothers’ Ashkenazi cooking. This baker is poised to make an impact, giving New York more of the bread it deserves.”

Morgan Tucker is is the Director

can be sourced through the Singer family of companies. To consult with our team, please email lmt@singerequipment.com.

of pastry, Sanin keeps pushing, conjuring that intrigue that keeps guests flowing through the doors of one of the world’s most legendary restaurants.” Bartender Aidan Bowie, The Office “Bowie crafts elegant, fragrant cocktails that playfully enamore the senses. He is also up to the challenge of running ambitious hotel bars, doubling down on leadership and staff education, and New York’s cocktail culture is all the better for it—now and for years to come.” And finally, the award that we have the pleasure of personally presenting on stage. Restaurateur Sean Feeney, Misi “Alongside Missy Robbins and her team, Feeney built a New York Times three-star, James Beard Award-winning restaurant on his first try. When he was just getting started, Feeney knew Robbins’ talent was at a level that he would have to match as a business partner. Now he’s a model for aspiring and veteran restaurateurs alike.” 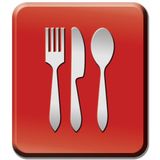