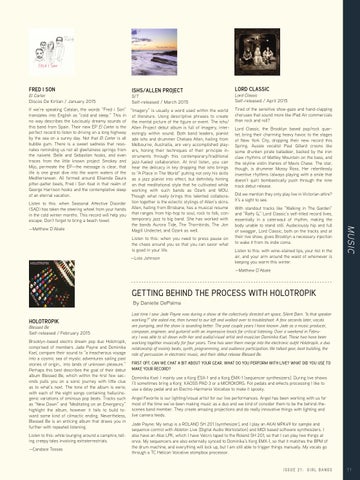 If we’re speaking Catalan, the words “Fred i Son” translates into English as “cold and sleep.” This in no way describes the lusciously dreamy sounds of this band from Spain. Their new EP El Carter is the perfect record to listen to driving on a long highway by the sea on a sunny day. Not that El Carter is all bubble gum. There is a sweet sadness that resonates reminding us not all gleefulness springs from the naiveté. Belle and Sebastian hooks, and even traces from the little known project Smokey and Mijo, permeate the EP—the message is clear, that life is one great dive into the warm waters of the Mediterranean. All formed around Elisenda Daura pitter-patter beats, Fred i Son float in that realm of George Harrison hooks and the contemplative sleep of an eternal vacation.

“Imagery” is usually a word used within the world of literature. Using descriptive phrases to create the mental picture of the figure or event. The ishs/ Allen Project debut album is full of imagery, interestingly within sound. Both band leaders, pianist ade ishs and drummer Chelsea Allen, hailing from Melbourne, Austrailia, are very accomplished players, honing their techniques of their principle instruments through this contemporary/traditional jazz-fueled collaboration. At first listen, you can hear the delicacy in key dropping that ishs brings to “A Place in The World” putting not only his skills as a jazz pianist into effect, but definitely hinting on that meditational style that he cultivated while working with such bands as Ozark and MOU. Though what really brings this talented collaboration together is the eclectic stylings of Allen’s skins. Allen, hailing from Brisbane, has a musical resume that ranges from hip-hop to soul, rock to folk, contemporary jazz to big band. She has worked with the bands Aurora Tide, The Thornbirds, The Jon Magill Undectet, and Ozark as well.

Tired of the sensitive shoe-gaze and hand-clapping choruses that sound more like iPad Air commercials than rock and roll?

Listen to this: when Seasonal Affective Disorder (SAD) has taken the steering wheel from your hands in the cold winter months. This record will help you escape. Don’t forget to bring a beach towel.

Listen to this: when you need to press pause on the chaos around you so that you can savor what is good in your life. —Lola Johnson

Did we mention they only play live in Victorian attire? It’s a sight to see. With standout tracks like “Walking in The Garden” and “Raffy G,” Lord Classic’s self-titled record lives, essentially in a caterwaul of rhythm, making the body unable to stand still. Audaciously hip and full of swagger, Lord Classic, both on the tracks and at their live show, gives Brooklyn a necessary injection to wake it from its indie coma. Listen to this: with wine-stained lips, your fist in the air, and your arm around the waist of whomever is keeping you warm this winter.

Lord Classic, the Brooklyn based pop/rock quartet, bring their charming heavy havoc to the stages of New York City, dropping their new record this Spring. Aussie vocalist Paul Gillard croons like some drunken pirate balladeer, backed by the iron claw rhythms of Mattley Mountain on the bass, and the skyline violin litanies of Mavis Chase. The star, though, is drummer Mossy Ross. Her relentlessly inventive rhythms (always playing with a smile that doesn’t quit) bombastically push through the nine track debut release.

GETTING BEHIND THE PROCESS WITH HOLOTROPIK By Danielle DePalma

Blessed Be Self-released / February 2015 Brooklyn-based electro dream pop duo Holotropik, comprised of members Jade Payne and Dominika Ksel, compare their sound to “a treacherous voyage into a cosmic sea of mystic adventures sailing past stories of origin… into lands of unknown pleasure.” Perhaps this best describes the goal of their debut album Blessed Be, which within the first few seconds pulls you on a sonic journey with little clue as to what’s next. The tone of the album is eerie; with each of the eight songs containing hallucinogenic variations of ominous pop beats. Tracks such as “New Dawn” and “Meditating on an Emergency” highlight the album, however it fails to build toward some kind of climactic ending. Nevertheless, Blessed Be is an enticing album that draws you in further with repeated listening. Listen to this: while lounging around a campfire, telling creepy tales involving extraterrestrials. —Candace Tossas

Last time I saw Jade Payne was during a show at the collectively directed art space, Silent Barn. “Is that speaker working?” she asked me, then turned to our left and walked over to troubleshoot. A few seconds later, vocals are pumping, and the show is sounding better. The past couple years I have known Jade as a music producer, composer, engineer, and guitarist with an impressive knack for critical listening. Over a weekend in February I was able to sit down with her and audio/visual artist and musician Dominika Ksel. These two have been working together musically for four years. Time has seen them merge into the electronic outfit Holotropik. a duo relationship of mainly beats, synth, programming, and audience participation. We talked gear, beat building, the role of percussion in electronic music, and their debut release Blessed Be.

FIRST OFF, CAN WE CHAT A BIT ABOUT YOUR GEAR. WHAT DO YOU PERFORM WITH LIVE? WHAT DID YOU USE TO MAKE YOUR RECORD? Dominika Ksel: I mainly use a Korg ESX-1 and a Korg EMX-1 [sequencer synthesizers]. During live shows I’ll sometimes bring a Korg KAOSS PAD 3 or a MICROKORG. For pedals and effects processing I like to use a delay pedal and an Electro-Harmonix Voicebox to make it spooky. Angel Favorite is our lighting/visual artist for our live performances. Angel has been working with us for most of the time we’ve been making music as a duo and we kind of consider them to be the behind-thescenes band member. They create amazing projections and do really innovative things with lighting and live camera feeds. Jade Payne: My setup is a ROLAND SH 201 [synthesizer], and I play an AKAI MPK49 for sample and sequence control with Ableton Live [Digital Audio Workstation] and MIDI based software synthesizers. I also have an Akai LPK, which I have Velcro taped to the Roland SH 201, so that I can play two things at once. My sequencers are also externally synced to Dominika’s Korg EMX-1, so that it matches the BPM of the drum machine, and everything will lock up, but I am still able to trigger things manually. My vocals go through a TC Helicon Voicelive stompbox processor.

The Girl Band Issue! We are very proud of this incredible issue of the mag (we are now 10 pages bigger - a WHOPPING 74 pages!!) and FIVE pl...

The Girl Band Issue! We are very proud of this incredible issue of the mag (we are now 10 pages bigger - a WHOPPING 74 pages!!) and FIVE pl...