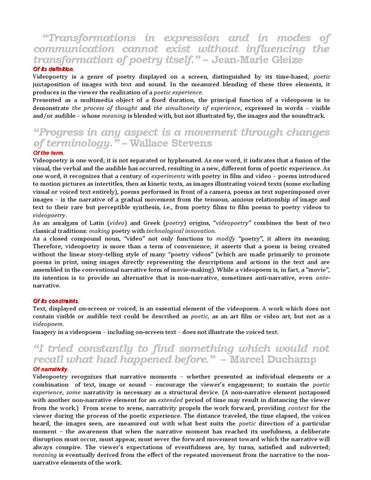 “Transformations in expression and in modes of communication cannot exist without influencing the transformation of poetry itself.” – Jean-Marie Gleize Of its definition.

Videopoetry is a genre of poetry displayed on a screen, distinguished by its time-based, poetic juxtaposition of images with text and sound. In the measured blending of these three elements, it produces in the viewer the realization of a poetic experience. Presented as a multimedia object of a fixed duration, the principal function of a videopoem is to demonstrate the process of thought and the simultaneity of experience, expressed in words – visible and/or audible – whose meaning is blended with, but not illustrated by, the images and the soundtrack.

“Progress in any aspect is a movement through changes of terminology.” – Wallace Stevens Of the term.

Videopoetry is one word; it is not separated or hyphenated. As one word, it indicates that a fusion of the visual, the verbal and the audible has occurred, resulting in a new, different form of poetic experience. As one word, it recognizes that a century of experiments with poetry in film and video – poems introduced to motion pictures as intertitles, then as kinetic texts, as images illustrating voiced texts (some excluding visual or voiced text entirely), poems performed in front of a camera, poems as text superimposed over images – is the narrative of a gradual movement from the tenuous, anxious relationship of image and text to their rare but perceptible synthesis, i.e., from poetry films to film poems to poetry videos to videopoetry. As an amalgam of Latin (video) and Greek (poetry) origins, “videopoetry” combines the best of two classical traditions: making poetry with technological innovation. As a closed compound noun, “video” not only functions to modify “poetry”, it alters its meaning. Therefore, videopoetry is more than a term of convenience; it asserts that a poem is being created without the linear story-telling style of many “poetry videos” (which are made primarily to promote poems in print, using images directly representing the descriptions and actions in the text and are assembled in the conventional narrative form of movie-making). While a videopoem is, in fact, a “movie”, its intention is to provide an alternative that is non-narrative, sometimes anti-narrative, even antenarrative. Of its constraints.

Text, displayed on-screen or voiced, is an essential element of the videopoem. A work which does not contain visible or audible text could be described as poetic, as an art film or video art, but not as a videopoem. Imagery in a videopoem – including on-screen text – does not illustrate the voiced text.

“I tried constantly to find something which would not recall what had happened before.” – Marcel Duchamp Of narrativity.

Videopoetry recognizes that narrative moments – whether presented as individual elements or a combination of text, image or sound – encourage the viewer’s engagement; to sustain the poetic experience, some narrativity is necessary as a structural device. (A non-narrative element juxtaposed with another non-narrative element for an extended period of time may result in distancing the viewer from the work.) From scene to scene, narrativity propels the work forward, providing context for the viewer during the process of the poetic experience. The distance traveled, the time elapsed, the voices heard, the images seen, are measured out with what best suits the poetic direction of a particular moment – the awareness that when the narrative moment has reached its usefulness, a deliberate disruption must occur, must appear, must sever the forward movement toward which the narrative will always conspire. The viewer’s expectations of eventfulness are, by turns, satisfied and subverted; meaning is eventually derived from the effect of the repeated movement from the narrative to the nonnarrative elements of the work.

A pioneer in the genre, Tom Konyves shares his vision for the form. 23,756 views from 65 countries to date. Read comments at: http://tinyurl.com/nqy583f 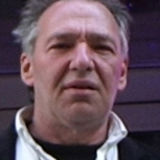