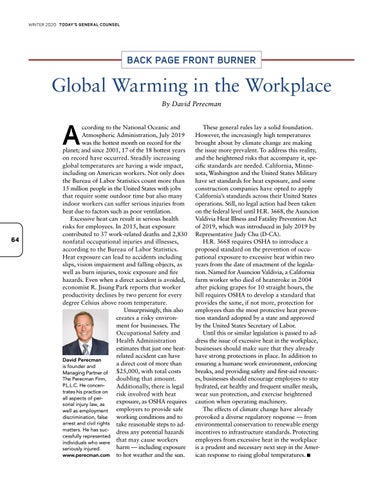 Global Warming in the Workplace By David Perecman

ccording to the National Oceanic and Atmospheric Administration, July 2019 was the hottest month on record for the planet; and since 2001, 17 of the 18 hottest years on record have occurred. Steadily increasing global temperatures are having a wide impact, including on American workers. Not only does the Bureau of Labor Statistics count more than 15 million people in the United States with jobs that require some outdoor time but also many indoor workers can suffer serious injuries from heat due to factors such as poor ventilation. Excessive heat can result in serious health risks for employees. In 2015, heat exposure contributed to 37 work-related deaths and 2,830 nonfatal occupational injuries and illnesses, according to the Bureau of Labor Statistics. Heat exposure can lead to accidents including slips, vision impairment and falling objects, as well as burn injuries, toxic exposure and fire hazards. Even when a direct accident is avoided, economist R. Jisung Park reports that worker productivity declines by two percent for every degree Celsius above room temperature. Unsurprisingly, this also creates a risky environment for businesses. The Occupational Safety and Health Administration estimates that just one heatrelated accident can have David Perecman a direct cost of more than is founder and $25,000, with total costs Managing Partner of The Perecman Firm, doubling that amount. P.L.L.C. He concenAdditionally, there is legal trates his practice on risk involved with heat all aspects of perexposure, as OSHA requires sonal injury law, as employers to provide safe well as employment discrimination, false working conditions and to arrest and civil rights take reasonable steps to admatters. He has suc- dress any potential hazards cessfully represented individuals who were that may cause workers harm — including exposure seriously injured. www.perecman.com to hot weather and the sun.

These general rules lay a solid foundation. However, the increasingly high temperatures brought about by climate change are making the issue more prevalent. To address this reality, and the heightened risks that accompany it, specific standards are needed. California, Minnesota, Washington and the United States Military have set standards for heat exposure, and some construction companies have opted to apply California’s standards across their United States operations. Still, no legal action had been taken on the federal level until H.R. 3668, the Asuncion Valdivia Heat Illness and Fatality Prevention Act of 2019, which was introduced in July 2019 by Representative Judy Chu (D-CA). H.R. 3668 requires OSHA to introduce a proposed standard on the prevention of occupational exposure to excessive heat within two years from the date of enactment of the legislation. Named for Asuncion Valdivia, a California farm worker who died of heatstroke in 2004 after picking grapes for 10 straight hours, the bill requires OSHA to develop a standard that provides the same, if not more, protection for employees than the most protective heat prevention standard adopted by a state and approved by the United States Secretary of Labor. Until this or similar legislation is passed to address the issue of excessive heat in the workplace, businesses should make sure that they already have strong protections in place. In addition to ensuring a humane work environment, enforcing breaks, and providing safety and first-aid resources, businesses should encourage employees to stay hydrated, eat healthy and frequent smaller meals, wear sun protection, and exercise heightened caution when operating machinery. The effects of climate change have already provoked a diverse regulatory response — from environmental conservation to renewable energy incentives to infrastructure standards. Protecting employees from excessive heat in the workplace is a prudent and necessary next step in the American response to rising global temperatures.

The EU’s data practice regulations and California’s new data privacy rules aren’t in the rearview mirror yet, but there is a new regulatory...

The EU’s data practice regulations and California’s new data privacy rules aren’t in the rearview mirror yet, but there is a new regulatory...