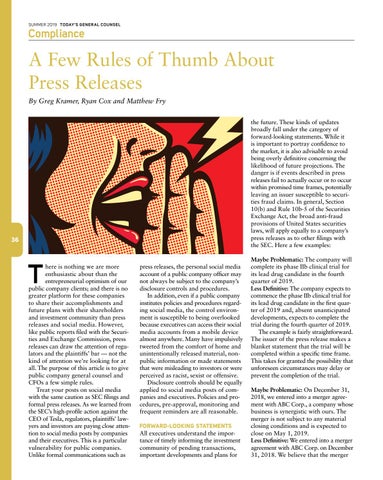 A Few Rules of Thumb About Press Releases By Greg Kramer, Ryan Cox and Matthew Fry the future. These kinds of updates broadly fall under the category of forward-looking statements. While it is important to portray confidence to the market, it is also advisable to avoid being overly definitive concerning the likelihood of future projections. The danger is if events described in press releases fail to actually occur or to occur within promised time frames, potentially leaving an issuer susceptible to securities fraud claims. In general, Section 10(b) and Rule 10b-5 of the Securities Exchange Act, the broad anti-fraud provisions of United States securities laws, will apply equally to a company’s press releases as to other filings with the SEC. Here a few examples:

here is nothing we are more enthusiastic about than the entrepreneurial optimism of our public company clients; and there is no greater platform for these companies to share their accomplishments and future plans with their shareholders and investment community than press releases and social media. However, like public reports filed with the Securities and Exchange Commission, press releases can draw the attention of regulators and the plaintiffs’ bar — not the kind of attention we’re looking for at all. The purpose of this article is to give public company general counsel and CFOs a few simple rules. Treat your posts on social media with the same caution as SEC filings and formal press releases. As we learned from the SEC’s high-profile action against the CEO of Tesla, regulators, plaintiffs’ lawyers and investors are paying close attention to social media posts by companies and their executives. This is a particular vulnerability for public companies. Unlike formal communications such as

press releases, the personal social media account of a public company officer may not always be subject to the company’s disclosure controls and procedures. In addition, even if a public company institutes policies and procedures regarding social media, the control environment is susceptible to being overlooked because executives can access their social media accounts from a mobile device almost anywhere. Many have impulsively tweeted from the comfort of home and unintentionally released material, nonpublic information or made statements that were misleading to investors or were perceived as racist, sexist or offensive. Disclosure controls should be equally applied to social media posts of companies and executives. Policies and procedures, pre-approval, monitoring and frequent reminders are all reasonable. FORWARD-LOOKING STATEMENTS

All executives understand the importance of timely informing the investment community of pending transactions, important developments and plans for

Data security regulation in this country has reached the point where federal standards, even strict ones, would be easier to deal with than...

Data security regulation in this country has reached the point where federal standards, even strict ones, would be easier to deal with than...