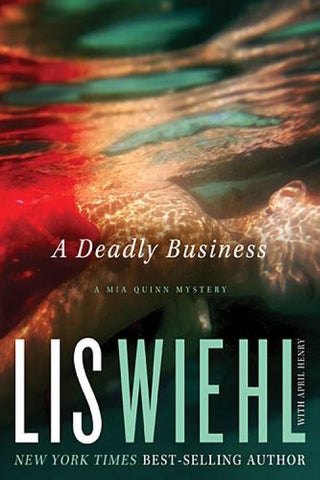 Acclaim for Lis Wiehl A Matter of Trust “A Matter of Trust is a stunning crime series debut from one of my favorite authors, Lis Wiehl. Smart, suspenseful, and full of twists that only an insider like Wiehl could pull off. I want prosecutor Mia Quinn in my corner when murder’s on the docket—she’s a compelling new character and I look forward to seeing her again soon.” —L i n da Fa i r st ei n , N e w Yor k Ti m es

The Triple Threat series “Only a brilliant lawyer, prosecutor, and journalist like Lis Wiehl could put together a mystery this thrilling! The incredible characters and nonstop twists will leave you mesmerized. Open [Face of Betrayal] and find a comfortable seat because you won’t want to put it down!” — E. D. H i ll , FOX N ews

“Who killed loudmouth radio guy Jim Fate? The game is afoot! Hand of Fate is a fun thriller, taking you inside the media world and the justice system—scary places to be!” — B i ll O’R ei lly, FOX TV

“Book three in the wonderful Triple Threat series is a fast-paced thriller full of twists and turns that will keep you guessing until the end. What makes these books stand out for me is my ability to identify so easily with Allison, Nic, and Cassidy. I truly care about what happens to each of them, and the challenges they face this time are heart-wrenching and realistic. I highly recommend!” — D ebor a h S i nc l a i r e ,

“Beautiful, successful, and charismatic on the outside but underneath a twisted killer. She’s brilliant and crazy and comes racing at the reader with knives and a smile. The most chilling villain you’ll meet . . . because she could live next door to you.” — D r . D a l e A rc h er ,

“One word describes Waking Hours by Wiehl and Nelson—WOW! A gut-wrenching ride of supernatural suspense that left me breathless and wanting more. The book was a reminder that the battle between God and Satan is not over. Highly recommended!” — C oll een C obl e ,

“A gripping plot, intriguing characters, supernatural underpinnings, and a splash of romance make Waking Hours a fast-paced and thoroughly enjoyable read. I want the next book in the series now!” — Ja m e s L. R u ba rt,

© 2014 by Lis Wiehl and April Henry All rights reserved. No portion of this book may be reproduced, stored in a retrieval system, or transmitted in any form or by any means—electronic, mechanical, photocopy, recording, scanning, or other—except for brief quotations in critical reviews or articles, without the prior written permission of the publisher. Published in Nashville, Tennessee, by Thomas Nelson. Thomas Nelson is a registered trademark of HarperCollins Christian Publishing, Inc. Thomas Nelson, Inc., books may be purchased in bulk for educational, business, fundraising, or sales promotional use. For information, please e-mail SpecialMarkets@ ThomasNelson.com. Publisher’s Note: This novel is a work of fiction. Names, characters, places, and incidents are either products of the authors’ imagination or used fictitiously. All characters are fictional, and any similarity to people living or dead is purely coincidental. Library of Congress Cataloging-in-Publication Data Wiehl, Lis W. A deadly business : a Mia Quinn mystery Lis Wiehl with April Henry. pages cm “A Mia Quinn mystery.” ISBN 978-1-59554-904-4 (hard cover) I. Title. PS3623.I382D43 2014 813&#39;.6—dc23 013049751 Printed in the United States of America 14 15 16 17 18 19 RRD 6 5 4 3 2 1

For my children, Jacob and Dani, with my unconditional love. Always. Mom

here are a million ways to die. As a prosecutor in Seattle’s King County Violent Crimes Unit, Mia Quinn had become familiar with far too many. But before the first week of November was over, she would learn there were even more ways than she’d thought.

“Good afternoon, Your Honor,” Mia said as Judge Rivas took the bench. Her phone hummed in her pocket, signaling a call or text, but she ignored it. Judge Rivas was a stickler for courtroom decorum. He inclined his buzz-cut head toward Mia, who stood at attention behind the prosecution table. “Good afternoon, Counselor.” He turned toward the empty defense table. “Is Mr. Dockins here?” The courtroom clerk, Trevor Gosden, answered, “Yes. He’s in with Mr. Young.” Despite the formal titles used in court, Mia thought that Trevor’s 1

LIS WIEHL with APRIL HENRY use of Mister most certainly did not belong with the name Young. Rolf Dockins was the defense attorney, a gentleman from the top of his silver hair down to his highly polished wing tips. And Bernard Young was the glowering twenty-two-year-old defendant he represented, aka the monster who had raped and strangled two runaway girls. Today Young was to be sentenced. There were only a few observers in the courtroom, most of them relatives of the girls. Mia had asked for life in prison, and felt confident Young would get it. Her case was airtight. Dockins had done what he could, but she was sure down to her bones that it wouldn’t be enough. Young would never be able to hurt anyone again. A side door opened and Rolf walked in, followed by Young in an orange jumpsuit. A sheriff’s deputy brought up the rear. Mia watched them walk toward the defense table, not thinking about anything except how her phone was buzzing again. Maybe she could manage to sneak a peek as she sat down. Then Young’s upper lip curled back and his eyes narrowed. His face was full of rage. And faster than Mia could react, faster than she could even process what was happening, he broke into a run. Straight for her. Then he lunged. Young had already fisted her hair in one hand before Mia drew breath to scream. The other hand pressed against her throat. They tumbled backward. She was still screaming when his weight punched all the air out of her. “Get off her!” Trevor yelled, swearing. “Get off her!” And then he threw himself on top of Young, wrestling with him. Mia’s thoughts ping-ponged from the pain in her scalp to the pressure on her throat to the sheer crushing weight of the two men. She squirmed and kicked and pushed, trying to get away, but she was pinned in place. “Just try it on me, man,” Trevor panted. “I’ll beat the crap out of you.” Now the deputy was grabbing at Young, yelling, adding his orders to the tumult. Even Rolf, who was seventy if he was a day, knelt next 2

A Deadly Business to them and began to yank and grab, trying to subdue his client. Mia found a brief moment to hope that the deputy didn’t draw his gun. All of them were so close together. “Watch out!” yelled Catherine, the court reporter. “He’s got a razor blade.” A razor blade? More frantically, Mia arched her back, twisting and kicking. She didn’t care if she kicked someone else or if Young tore all the hair out of her head. She had to get loose before he slashed her throat. For a moment the weight left her neck, but even before she could feel a surge of relief it was back. And then Mia felt a small sharp edge press against her throat.

verything was moving in slow motion. Mia had all the time in the world to think, even if she had no time to save herself. Time to imagine how the delicate white skin of her throat would part in a red line that would widen into a bloody smile. Time to think about her children. Brooke was only four, Gabe fourteen. Both of them needed their mother. Needed Mia more than ever, since the car accident seven months earlier that had taken Scott from them. “I got his wrist,” Trevor yelled as an elbow pressed into Mia’s rib cage. “Cuff him from the other side!” And suddenly the weight came off Mia as the group of men wrestled a swearing Young back, yanking him to his feet. She sucked in air. With a trembling hand she risked touching her throat, afraid of what she might find. But no hot blood pulsed from her neck. Her shaking fingers found just smooth skin. Two more deputies ran into the courtroom with their guns drawn. Everyone was talking at once. Mia pushed herself to a sitting position and turned to Catherine, who had crept closer. “Did he cut me?” 4

A Deadly Business “No,” Catherine said. Her eyes were wide and she had her hands to her own throat. “No, thank God. Should I call an ambulance?” “I’m sorry!” Young called out, though he didn’t look it. Trevor pushed his shoulder. “It’s a little late for that.” Rolf helped Mia to her feet and guided her to a chair. “I’m so sorry,” he said. “Just before we came in, he asked me if I thought you had any remorse. I said you were just doing your job. I’m sorry if that had anything to do with it.” “It’s the truth,” she said, massaging her neck. “And thanks for helping get him off me.” He smoothed down the front of his now rumpled suit. “As soon as Bernard ran past me and I heard you scream, I decided I no longer cared about attorney-client privilege.” Mia was surprised to find that she could still smile. One of the deputies who had responded knelt in front of her. He had a shaved head and golden brown eyes. “I have first aid training.” As he spoke, he pulled on bright purple vinyl gloves. “Where are you injured?” “I thought he cut me, but I guess he didn’t.” Lifting her chin, Mia touched the spot where she had felt something sharp. “Like right here.” He bent closer. “From the shape of it, I’d say it’s a fingernail mark. But it didn’t break the skin. Did you get hurt anyplace else?” “Some bruises, but that’s all.” Now that it was over, Mia was starting to shake in earnest. “Everyone piled on him so fast, I don’t think he had a chance to hurt me.” “He had a razor blade,” Trevor said grimly, “but I knocked it out of his hand.” Rolf said, “Thank God for that. He’d have cut your throat for sure, Mia.” “Okay, I’m going to touch your neck.” The deputy gently cradled the back of Mia’s head in one hand while he stroked and pressed her throat with the other. “I think you’re right. Just bruises. Nothing 5

LIS WIEHL with APRIL HENRY broken. Your hyoid bone feels intact. You might want to go to the hospital to get checked out. It’s up to you. We could call an ambulance.” Mia knew she most definitely did not want to spend the next two hours getting poked and prodded, surrounded by the stress of a busy emergency room. All she wanted to do was go back to her office, pick up her things, and go home to her kids. “I don’t think I want to do that.” She looked up at the judge, who had come down off the bench too late to join the fray. It was strange to realize the whole thing had lasted only a few seconds. “You sure you don’t want to go to the hospital, Mia?” he asked. “I’m sure.” Everyone was looking at her, including the man who had just tried to kill her. It was one thing to be the center of attention when you were asking the court to take away a man’s life, either literally or figuratively. It was another when the tables were turned. When you were the one at risk. Judge Rivas turned to Rolf. “Obviously, sentencing will have to be delayed. And your client will probably face more charges.” “Obviously.” Rolf straightened his tie. “And his family may need to hire a new lawyer. It’s one thing to make sure my client gets a fair trial. It’s another to have to stop him from killing the prosecutor.”