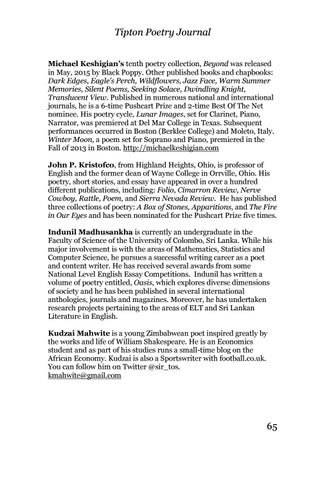 Tipton Poetry Journal Michael Keshigianâ&#x20AC;&#x2122;s tenth poetry collection, Beyond was released in May, 2015 by Black Poppy. Other published books and chapbooks: Dark Edges, Eagleâ&#x20AC;&#x2122;s Perch, Wildflowers, Jazz Face, Warm Summer Memories, Silent Poems, Seeking Solace, Dwindling Knight, Translucent View. Published in numerous national and international journals, he is a 6-time Pushcart Prize and 2-time Best Of The Net nominee. His poetry cycle, Lunar Images, set for Clarinet, Piano, Narrator, was premiered at Del Mar College in Texas. Subsequent performances occurred in Boston (Berklee College) and Moleto, Italy. Winter Moon, a poem set for Soprano and Piano, premiered in the Fall of 2013 in Boston. http://michaelkeshigian.com John P. Kristofco, from Highland Heights, Ohio, is professor of English and the former dean of Wayne College in Orrville, Ohio. His poetry, short stories, and essay have appeared in over a hundred different publications, including: Folio, Cimarron Review, Nerve Cowboy, Rattle, Poem, and Sierra Nevada Review. He has published three collections of poetry: A Box of Stones, Apparitions, and The Fire in Our Eyes and has been nominated for the Pushcart Prize five times. Indunil Madhusankha is currently an undergraduate in the Faculty of Science of the University of Colombo, Sri Lanka. While his major involvement is with the areas of Mathematics, Statistics and Computer Science, he pursues a successful writing career as a poet and content writer. He has received several awards from some National Level English Essay Competitions. Indunil has written a volume of poetry entitled, Oasis, which explores diverse dimensions of society and he has been published in several international anthologies, journals and magazines. Moreover, he has undertaken research projects pertaining to the areas of ELT and Sri Lankan Literature in English. Kudzai Mahwite is a young Zimbabwean poet inspired greatly by the works and life of William Shakespeare. He is an Economics student and as part of his studies runs a small-time blog on the African Economy. Kudzai is also a Sportswriter with football.co.uk. You can follow him on Twitter @sir_tos. kmahwite@gmail.com