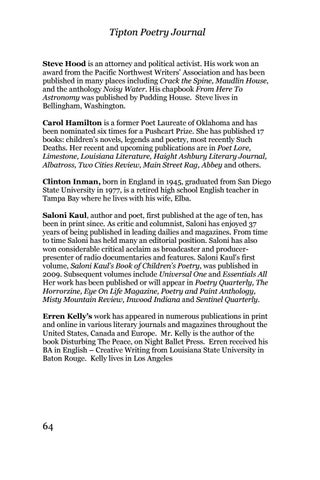 Tipton Poetry Journal Steve Hood is an attorney and political activist. His work won an award from the Pacific Northwest Writers’ Association and has been published in many places including Crack the Spine, Maudlin House, and the anthology Noisy Water. His chapbook From Here To Astronomy was published by Pudding House. Steve lives in Bellingham, Washington. Carol Hamilton is a former Poet Laureate of Oklahoma and has been nominated six times for a Pushcart Prize. She has published 17 books: children’s novels, legends and poetry, most recently Such Deaths. Her recent and upcoming publications are in Poet Lore, Limestone, Louisiana Literature, Haight Ashbury Literary Journal, Albatross, Two Cities Review, Main Street Rag, Abbey and others. Clinton Inman, born in England in 1945, graduated from San Diego State University in 1977, is a retired high school English teacher in Tampa Bay where he lives with his wife, Elba. Saloni Kaul, author and poet, first published at the age of ten, has been in print since. As critic and columnist, Saloni has enjoyed 37 years of being published in leading dailies and magazines. From time to time Saloni has held many an editorial position. Saloni has also won considerable critical acclaim as broadcaster and producerpresenter of radio documentaries and features. Saloni Kaul's first volume, Saloni Kaul’s Book of Children’s Poetry, was published in 2009. Subsequent volumes include Universal One and Essentials All Her work has been published or will appear in Poetry Quarterly, The Horrorzine, Eye On Life Magazine, Poetry and Paint Anthology, Misty Mountain Review, Inwood Indiana and Sentinel Quarterly. Erren Kelly’s work has appeared in numerous publications in print and online in various literary journals and magazines throughout the United States, Canada and Europe. Mr. Kelly is the author of the book Disturbing The Peace, on Night Ballet Press. Erren received his BA in English – Creative Writing from Louisiana State University in Baton Rouge. Kelly lives in Los Angeles