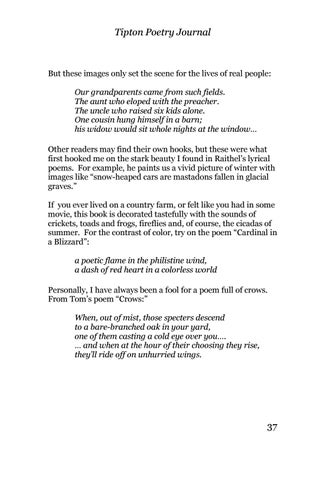 But these images only set the scene for the lives of real people: Our grandparents came from such fields. The aunt who eloped with the preacher. The uncle who raised six kids alone. One cousin hung himself in a barn; his widow would sit whole nights at the window… Other readers may find their own hooks, but these were what first hooked me on the stark beauty I found in Raithel’s lyrical poems. For example, he paints us a vivid picture of winter with images like “snow-heaped cars are mastadons fallen in glacial graves.” If you ever lived on a country farm, or felt like you had in some movie, this book is decorated tastefully with the sounds of crickets, toads and frogs, fireflies and, of course, the cicadas of summer. For the contrast of color, try on the poem “Cardinal in a Blizzard”: a poetic flame in the philistine wind, a dash of red heart in a colorless world Personally, I have always been a fool for a poem full of crows. From Tom’s poem “Crows:” When, out of mist, those specters descend to a bare-branched oak in your yard, one of them casting a cold eye over you…. … and when at the hour of their choosing they rise, they’ll ride off on unhurried wings.