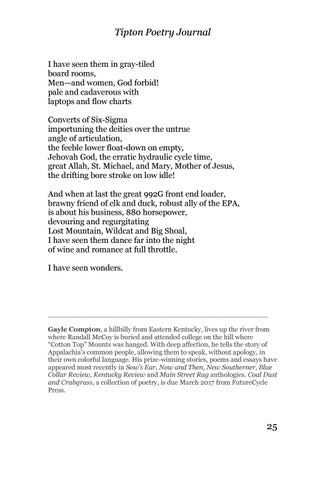 Tipton Poetry Journal I have seen them in gray-tiled board rooms, Men—and women, God forbid! pale and cadaverous with laptops and flow charts Converts of Six-Sigma importuning the deities over the untrue angle of articulation, the feeble lower float-down on empty, Jehovah God, the erratic hydraulic cycle time, great Allah, St. Michael, and Mary, Mother of Jesus, the drifting bore stroke on low idle! And when at last the great 992G front end loader, brawny friend of elk and duck, robust ally of the EPA, is about his business, 880 horsepower, devouring and regurgitating Lost Mountain, Wildcat and Big Shoal, I have seen them dance far into the night of wine and romance at full throttle. I have seen wonders.

_______________________________________________ Gayle Compton, a hillbilly from Eastern Kentucky, lives up the river from where Randall McCoy is buried and attended college on the hill where “Cotton Top” Mounts was hanged. With deep affection, he tells the story of Appalachia’s common people, allowing them to speak, without apology, in their own colorful language. His prize-winning stories, poems and essays have appeared most recently in Sow’s Ear, Now and Then, New Southerner, Blue Collar Review, Kentucky Review and Main Street Rag anthologies. Coal Dust and Crabgrass, a collection of poetry, is due March 2017 from FutureCycle Press.