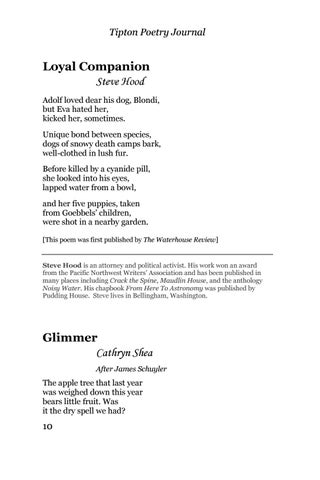 Loyal Companion Steve Hood Adolf loved dear his dog, Blondi, but Eva hated her, kicked her, sometimes. Unique bond between species, dogs of snowy death camps bark, well-clothed in lush fur. Before killed by a cyanide pill, she looked into his eyes, lapped water from a bowl, and her five puppies, taken from Goebbelsâ&amp;#x20AC;&amp;#x2122; children, were shot in a nearby garden. [This poem was first published by The Waterhouse Review]

Steve Hood is an attorney and political activist. His work won an award from the Pacific Northwest Writersâ&amp;#x20AC;&amp;#x2122; Association and has been published in many places including Crack the Spine, Maudlin House, and the anthology Noisy Water. His chapbook From Here To Astronomy was published by Pudding House. Steve lives in Bellingham, Washington.

The apple tree that last year was weighed down this year bears little fruit. Was it the dry spell we had? 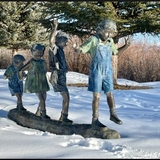