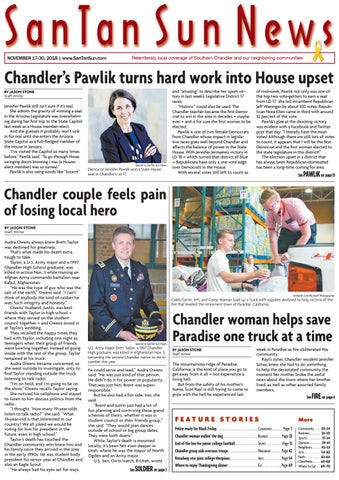 Jennifer Pawlik still isn’t sure if it’s real. She admits the gravity of winning a seat in the Arizona Legislature was overwhelming during her first trip to the State Capitol last week as a House member-elect. And she guesses it probably won’t sink in for real until she enters the Arizona State Capitol as a full-fledged member of the House in January. “I’ve visited the Capitol so many times before,” Pawlik said. “To go through those swinging doors knowing I was (a Houseelect member) was so surreal.” Pawlik is also using words like “bizarre”

and “amazing” to describe her upset victory in last week’s Legislative District 17 races. “Historic” could also be used. The Chandler teacher became the first Democrat to win in the area in decades – maybe ever – and is for sure the first woman to be elected. Pawlik is one of two female Democrats from Chandler whose impact in legislative races goes well beyond Chandler and affects the balance of power in the State House. With Jennifer Jermaine’s victory in LD 18 – which turned that district all blue – Republicans have only a one vote edge over Democrats in the Hosue. With several votes still left to count as

of mid-week, Pawlik not only was one of the top two vote-getters to earn a seat from LD 17, she led incumbent Republican Jeff Weninger by about 100 votes. Republican Nora Ellen came in third with around 32 percent of the vote. Pawlik’s glee at the shocking victory was evident with a Facebook and Twitter post that day: “I literally have the most votes! Although there are still lots of votes to count, it appears that I will be the first Democrat and the first woman elected to the state legislature in this district!” The election upset in a district that has always been Republican-dominated has been a long-time coming for area See

Audra Owens always knew Brett Taylor was destined for greatness. That’s what made his death extra tough to take. Taylor, a U.S. Army major and a 1997 Chandler High School graduate, was killed in action Nov. 3 while training an Afghan Army commando battalion near Kabul, Afghanistan. “He was the type of guy who was the salt of the earth,” Owens said. “I can’t think of anybody the kind of caliber he was. Such integrity and honesty.” Owens’ husband, Justin, was best friends with Taylor in high school – where they served on the student council together – and Owens stood in at Taylor’s wedding. They recalled the happy times they had with Taylor, including one night as teenagers when their group of friends went bowling together. Instead of going inside with the rest of the group, Taylor remained at his truck. Audra Owens became concerned, so she went outside to investigate, only to find Taylor standing outside the truck listening to talk radio. “I’m on hold, and I’m going to be on the show,” Owens recalls Taylor saying. She noticed his cellphone and stayed to listen to him discuss politics from the radio. “I thought, ‘How many 19-year-olds listen to talk radio?” she said. “What 19-year-old is that interested in our country? We all joked we would be voting for him for president in the future, even in high school.” Taylor’s death has touched the Chandler community who knew him and his family since they arrived in the area in the early 1990s. He was student body president his senior year at Chandler and also an Eagle Scout. “He always had his eyes set for ways

Caleb Carter, left, and Corey Yeaman load up a truck with supplies destined to help victims of the fi re that leveled the retirement town of Paradise, California.

he could serve and lead,” Audra Owens said. “He was just kind of that person. He didn’t do it for power or popularity. That was just him. Brent was superresponsible.” But he also had a fun side, too, she said. “Brent and Justin just had a lot of fun planning and contriving these grand schemes of theirs, whether it was in student council or their friends group,” she said. “They would plan dances outside of school or big group dates. They were both doers.” While Taylor’s death is mourned locally, it’s been felt even deeper in Utah, where he was the mayor of North Ogden and an Army major. U.S. Sen. Orrin Hatch, R-Utah, wrote See

The mountainous ridge of Paradise, California, is the kind of place you go to get away from it all – not experience a living hell. But from the safety of his mother’s home, Scot Rayl is still trying to come to grips with the hell he experienced last

week in Paradise as fire obliterated the community. Rayl’s sister, Chandler resident Jennifer Simas, knew she had to do something to help the devastated community the moment her mother broke the awful news about the town where her brother lived, as well as other assorted family members. See