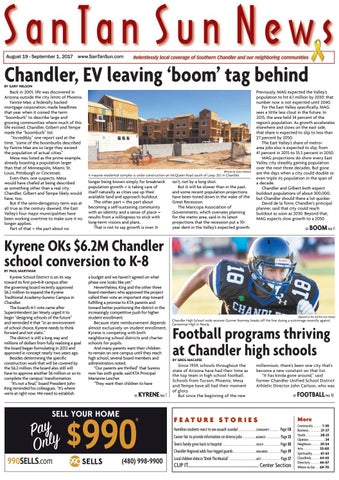 Back in 2001, life was discovered in Arizona outside the city limits of Phoenix. Fannie Mae, a federally backed mortgage corporation, made headlines that year when it coined the term “boomburb” to describe large and growing communities where much of this life existed. Chandler, Gilbert and Tempe made the “boomburb” list. “Incredibly,” one report said at the time, “some of the boomburbs described by Fannie Mae are so large they exceed the population of actual cities.” Mesa was listed as the prime example, already boasting a population larger than that of Minneapolis, Miami, St. Louis, Pittsburgh or Cincinnati. Even then, one suspects, Mesa would have chafed at being described as something other than a real city. Chandler, Gilbert and Tempe likely would have, too. But if the semi-derogatory term was at all true as the century dawned, the East Valley’s four major municipalities have been working overtime to make sure it no longer applies. Part of that – the part about no

A massive residential complex is under construction on McQueen Road south of Loop 202 in Chandler.

longer being known simply for breakneck population growth – is taking care of itself naturally as cities use up their available land and approach buildout. The other part – the part about becoming a self-sustaining community with an identity and a sense of place – results from a willingness to stick with long-term visions and plans. That is not to say growth is over. It

isn’t, not by a long shot. But it will be slower than in the past, and some recent population projections have been toned down in the wake of the Great Recession. The Maricopa Association of Governments, which oversees planning for the metro area, said in its latest projections that the recession put a 10year dent in the Valley’s expected growth.

Previously, MAG expected the Valley’s population to hit 6.1 million by 2030; that number now is not expected until 2040. For the East Valley specifically, MAG sees a little less clout in the future. In 2015, the area held 34 percent of the region’s population. As growth accelerates elsewhere and slows on the east side, that share is expected to slip to less than 27 percent by 2050. The East Valley’s share of metroarea jobs also is expected to slip, from 41 percent in 2015 to 35.5 percent in 2050. MAG projections do show every East Valley city steadily gaining population over the next three decades. But gone are the days when a city could double or even triple its population in the span of a decade. Chandler and Gilbert both expect buildout populations of about 300,000, but Chandler should there a lot quicker. David de la Torre, Chandler’s principal planner, said that city could reach buildout as soon as 2030. Beyond that, MAG expects slow growth to a 2050 see

Kyrene School District is on its way toward its first pre-K-8 campus after the governing board recently approved $6.2 million to expand the Kyrene Traditional Academy-Sureno Campus in Chandler. The board’s 4-1 vote came after Superintendent Jan Vesely urged it to begin “designing schools of the future” and reminded it that “in an environment of school choice, Kyrene needs to think forward and not static.” The district is still a long way and millions of dollars from fully realizing a goal the board began formulating in 2012 and approved in concept nearly two years ago. Besides determining the specific construction work that will be covered by the $6.2 million, the board also still will have to approve another $6 million or so to complete the campus’ transformation. “It’s not a final,” board President John King reminded his colleagues. “It’s where we’re at right now. We need to establish

a budget and we haven’t agreed on what phase one looks like yet.” Nevertheless, King and the other three board members who approved the project called their vote an important step toward fulfilling a promise to KTA parents and toward better positioning the district in the increasingly competitive push for higher student enrollment. Because state reimbursement depends almost exclusively on student enrollment, Kyrene is competing with both neighboring school districts and charter schools for pupils. And many parents want their children to remain on one campus until they reach high school, several board members and administrators noted. “Our parents are thrilled” that Sureno now has sixth grade, said KTA Principal Marianne Lescher. “They want their children to have

(Special to the SanTan Sun News)

Chandler High School wide receiver Gunner Romney breaks off the line during a scrimmage recently against Centennial High in Peoria.

Since 1959, schools throughout the state of Arizona have had their time as the top team in high school football. Schools from Tucson, Phoenix, Mesa and Tempe have all had their moment of glory. But since the beginning of the new

millennium, there’s been one city that’s become a new constant on that list. “It has kinda gone around,” said former Chandler Unified School District Athletic Director John Carlson, who was see