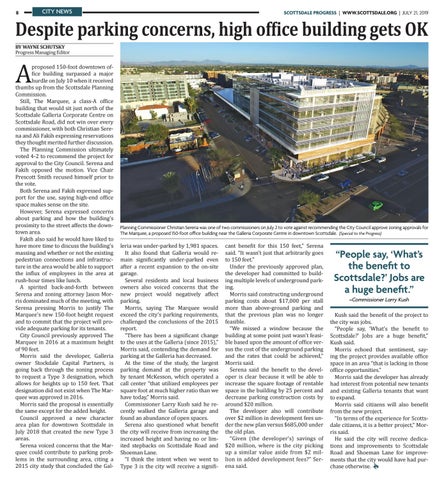 proposed 150-foot downtown of�ice building surpassed a major hurdle on July 10 when it received thumbs up from the Scottsdale Planning Commission. Still, The Marquee, a class-A of�ice building that would sit just north of the Scottsdale Galleria Corporate Centre on Scottsdale Road, did not win over every commissioner, with both Christian Serena and Ali Fakih expressing reservations they thought merited further discussion. The Planning Commission ultimately voted 4-2 to recommend the project for approval to the City Council. Serena and Fakih opposed the motion. Vice Chair Prescott Smith recused himself prior to the vote. Both Serena and Fakih expressed support for the use, saying high-end of�ice space makes sense on the site. However, Serena expressed concerns about parking and how the building’s proximity to the street affects the downtown area. Fakih also said he would have liked to have more time to discuss the building’s massing and whether or not the existing pedestrian connections and infrastructure in the area would be able to support the in�lux of employees in the area at rush-hour times like lunch. A spirited back-and-forth between Serena and zoning attorney Jason Morris dominated much of the meeting, with Serena pressing Morris to justify The Marquee’s new 150-foot height request and to commit that the project will provide adequate parking for its tenants. City Council previously approved The Marquee in 2016 at a maximum height of 90 feet. Morris said the developer, Galleria owner Stockdale Capital Partners, is going back through the zoning process to request a Type 3 designation, which allows for heights up to 150 feet. That designation did not exist when The Marquee was approved in 2016. Morris said the proposal is essentially the same except for the added height. Council approved a new character area plan for downtown Scottsdale in July 2018 that created the new Type 3 areas. Serena voiced concerns that the Marquee could contribute to parking problems in the surrounding area, citing a 2015 city study that concluded the Gal-

Planning Commissioner Christian Serena was one of two commissioners on July 2 to vote against recommending the City Council approve zoning approvals for The Marquee, a proposed 150-foot office building near the Galleria Corporate Centre in downtown Scottsdale. (Special to the Progress)

leria was under-parked by 1,981 spaces. It also found that Galleria would remain signi�icantly under-parked even after a recent expansion to the on-site garage. Several residents and local business owners also voiced concerns that the new project would negatively affect parking. Morris, saying The Marquee would exceed the city’s parking requirements, challenged the conclusions of the 2015 report. “There has been a signi�icant change to the uses at the Galleria (since 2015),” Morris said, contending the demand for parking at the Galleria has decreased. At the time of the study, the largest parking demand at the property was by tenant McKesson, which operated a call center “that utilized employees per square foot at much higher ratio than we have today,” Morris said. Commissioner Larry Kush said he recently walked the Galleria garage and found an abundance of open spaces. Serena also questioned what bene�it the city will receive from increasing the increased height and having no or limited stepbacks on Scottsdale Road and Shoeman Lane. “I think the intent when we went to Type 3 is the city will receive a signi�i-

cant bene�it for this 150 feet,” Serena said. “It wasn’t just that arbitrarily goes to 150 feet.” Under the previously approved plan, the developer had committed to building multiple levels of underground parking. Morris said constructing underground parking costs about $17,000 per stall more than above-ground parking and that the previous plan was no longer feasible. “We missed a window because the building at some point just wasn’t feasible based upon the amount of of�ice versus the cost of the underground parking and the rates that could be achieved,” Morris said. Serena said the bene�it to the developer is clear because it will be able to increase the square footage of rentable space in the building by 25 percent and decrease parking construction costs by around $20 million. The developer also will contribute over $2 million in development fees under the new plan versus $685,000 under the old plan. “Given (the developer’s) savings of $20 million, where is the city picking up a similar value aside from $2 million in added development fees?” Serena said.

Kush said the bene�it of the project to the city was jobs. “People say, ‘What’s the bene�it to Scottsdale?’ Jobs are a huge bene�it,” Kush said. Morris echoed that sentiment, saying the project provides available of�ice space in an area “that is lacking in those of�ice opportunities.” Morris said the developer has already had interest from potential new tenants and existing Galleria tenants that want to expand. Morris said citizens will also bene�it from the new project. “In terms of the experience for Scottsdale citizens, it is a better project,” Morris said. He said the city will receive dedications and improvements to Scottsdale Road and Shoeman Lane for improvements that the city would have had purchase otherwise.