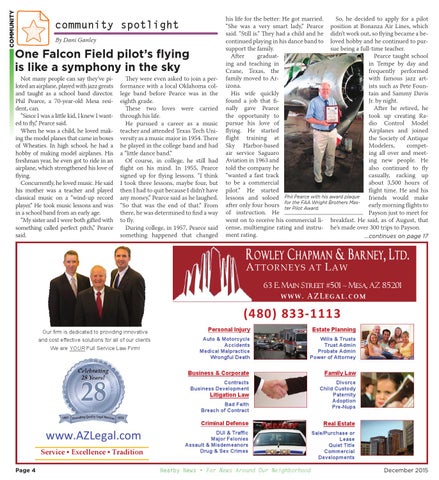 Not many people can say they’ve piloted an airplane, played with jazz greats and taught as a school band director. Phil Pearce, a 70-year-old Mesa resident, can. “Since I was a little kid, I knew I wanted to fly,” Pearce said. When he was a child, he loved making the model planes that came in boxes of Wheaties. In high school, he had a hobby of making model airplanes. His freshman year, he even got to ride in an airplane, which strengthened his love of flying. Concurrently, he loved music. He said his mother was a teacher and played classical music on a “wind-up record player.” He took music lessons and was in a school band from an early age. “My sister and I were both gifted with something perfect pitch,” Pearce called said. classifieds

They were even asked to join a performance with a local Oklahoma college band before Pearce was in the eighth grade. These two loves were carried through his life. He pursued a career as a music teacher and attended Texas Tech University as a music major in 1954. There he played in the college band and had a “little dance band.” Of course, in college, he still had flight on his mind. In 1955, Pearce signed up for flying lessons. “I think I took three lessons, maybe four, but then I had to quit because I didn’t have any money,” Pearce said as he laughed. “So that was the end of that.” From there, he was determined to find a way to fly. During college, in 1957, Pearce said something happened that changed expensive homes

his life for the better: He got married. So, he decided to apply for a pilot “She was a very smart lady,” Pearce position at Bonanza Air Lines, which said. “Still is.” They had a child and he didn’t work out, so flying became a becontinued playing in his dance band to loved hobby and he continued to pursupport the family. sue being a full-time teacher. After graduatPearce taught school ing and teaching in in Tempe by day and Crane, Texas, the frequently performed family moved to Arwith famous jazz artizona. ists such as Pete FounHis wife quickly tain and Sammy Davis found a job that fiJr. by night. nally gave Pearce After he retired, he the opportunity to took up creating Rapursue his love of dio Control Model flying. He started Airplanes and joined flight training at the Society of Antique Sky Harbor-based Modelers, competair service Saguaro ing all over and meetAviation in 1963 and ing new people. He told the company he also continued to fly “wanted a fast track casually, racking up to be a commercial about 3,500 hours of pilot.” He started flight time. He and his Phil Pearce with his award plaque lessons and soloed friends would make the FAA Wright Brothers Masafter only four hours for early morning flights to ter Pilot Award. of instruction. He Payson just to meet for went on to receive his commercial li- breakfast. He said, as of August, that cense, multiengine rating and instru- he’s made over 300 trips to Payson. ment rating. ...continues on page 17

We are YOUR Full Service Law Firm!

Nearby News • For News Around Our Neighborhood