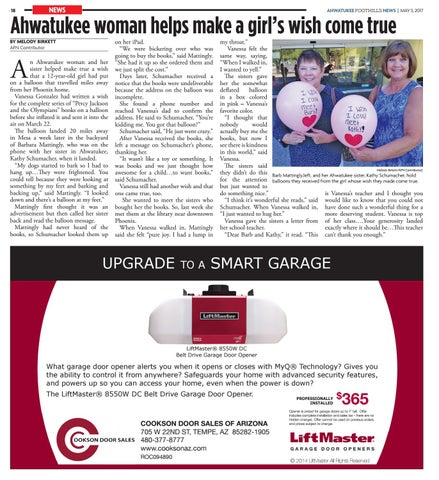 n Ahwatukee woman and her sister helped make true a wish that a 12-year-old girl had put on a balloon that travelled miles away from her Phoenix home. Vanessa Gonzalez had written a wish for the complete series of “Percy Jackson and the Olympians” books on a balloon before she inflated it and sent it into the air on March 22. The balloon landed 20 miles away in Mesa a week later in the backyard of Barbara Mattingly, who was on the phone with her sister in Ahwatukee, Kathy Schumacher, when it landed. “My dogs started to bark so I had to hang up…They were frightened. You could tell because they were looking at something by my feet and barking and backing up,” said Mattingly. “I looked down and there’s a balloon at my feet.” Mattingly first thought it was an advertisement but then called her sister back and read the balloon message. Mattingly had never heard of the books, so Schumacher looked them up

on her iPad. “We were bickering over who was going to buy the books,” said Mattingly. “She had it up so she ordered them and we just split the cost.” Days later, Schumacher received a notice that the books were undeliverable because the address on the balloon was incomplete. She found a phone number and reached Vanessa’s dad to confirm the address. He said to Schumacher, “You’re kidding me. You got that balloon?” Schumacher said, “He just went crazy.” After Vanessa received the books, she left a message on Schumacher’s phone, thanking her. “It wasn’t like a toy or something. It was books and we just thought how awesome for a child…to want books,” said Schumacher. Vanessa still had another wish and that one came true, too. She wanted to meet the sisters who bought her the books. So, last week she met them at the library near downtown Phoenix. When Vanessa walked in, Mattingly said she felt “pure joy. I had a lump in

my throat.” Vanessa felt the same way, saying, “When I walked in, I wanted to yell.” The sisters gave her the somewhat deflated balloon in a box colored in pink – Vanessa’s favorite color. “I thought that nobody would actually buy me the books, but now I see there is kindness in this world,” said Vanessa. The sisters said Melody Birkett/AFN Contributor) they didn’t do this Barb Mattingly,left, and her Ahwatukee sister, Kathy Schumacher, hold for the attention balloons they received from the girl whose wish they made come true. but just wanted to do something nice.” is Vanessa’s teacher and I thought you “I think it’s wonderful she reads,” said would like to know that you could not Schumacher. When Vanessa walked in, have done such a wonderful thing for a “I just wanted to hug her.” more deserving student. Vanessa is top Vanessa gave the sisters a letter from of her class….Your generosity landed her school teacher. exactly where it should be…This teacher “Dear Barb and Kathy,” it read. “This can’t thank you enough.”

What garage door opener alerts you when it opens or closes with MyQ® Technology? Gives you the ability to control it from anywhere? Safeguards your home with advanced security features, and powers up so you can access your home, even when the power is down? The LiftMaster® 8550W DC Belt Drive Garage Door Opener.

Opener is priced for garage doors up to 7’ tall. Offer includes complete installation and sales tax - there are no hidden charges. Offer cannot be used on previous orders and prices subject to change.