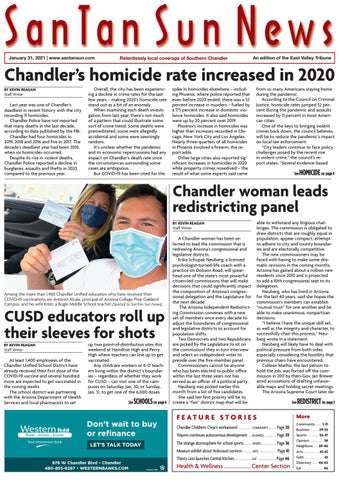 Last year was one of Chandler’s deadliest in recent history with the city recording 11 homicides. Chandler Police have not reported that many deaths in the last decade, according to data published by the FBI. Chandler had four homicides in 2019, 2018 and 2016 and five in 2017. The decade’s deadliest year had been 2010, when six homicides occurred. Despite its rise in violent deaths, Chandler Police reported a decline in burglaries, assaults and thefts in 2020 compared to the previous year.

Overall, the city has been experiencing a decline in crime rates for the last few years – making 2020’s homicide rate stand out as a bit of an anomaly. When examining each death investigation from last year, there’s not much of a pattern that could illustrate some sort of crime trend. Some deaths were premeditated, some were allegedly accidental and some were seemingly random. It’s unclear whether the pandemic and its economic repercussions had any impact on Chandler’s death rate since the circumstances surrounding some cases are ambiguous. But COVID-19 has been cited for the

from so many Americans staying home during the pandemic. According to the Council on Criminal Justice, homicide rates jumped 32 percent during the pandemic and assaults increased by 11 percent in most American cities. One of the keys to bringing violent crimes back down, the council believes, will be to reduce the pandemic’s impact on local law enforcement. “City leaders continue to face policy challenges posed by the recent rise in violent crime,” the council’s report states. “Several evidence-based See

Among the more than 1,400 Chandler Unified educators who have received their COVID-19 vaccinations are Antonio Alcala, principal of Arizona College Prep Oakland Campus, and his wife Kristi, a Bogle Middle School teacher. (Special to SanTan Sun News)

CUSD educators roll up their sleeves for shots

At least 1,400 employees of the Chandler Unified School District have already received their first dose of the COVID-19 vaccine and several hundred more are expected to get vaccinated in the coming weeks. The school district was partnering with the Arizona Department of Health Services and local pharmacists to set

up two point-of-distribution sites this weekend at Hamilton High and Perry High where teachers can line up to get vaccinated. Any childcare workers or K-12 teachers living within the district’s boundaries – regardless of whether they work for CUSD – can visit one of the campuses on Saturday, Jan. 30, or Sunday, Jan. 31, to get one of the 6,000 doses See

Don’t wait to buy or refinance

A Chandler woman has been selected to lead the commission that is redrawing Arizona’s congressional and legislative districts. Erika Schupak Neuberg, a licensed psychologist-turned-life coach with a practice on Dobson Road, will spearhead one of the state’s most powerful citizen-led commissions that will make decisions that could significantly impact the composition of Arizona’s congressional delegation and the Legislature for the next decade. The Arizona Independent Redistricting Commission convenes with a new set of members once every decade to adjust the boundaries of congressional and legislative districts to account for population shifts. Two Democrats and two Republicans are picked by the Legislature to sit on the commissionl they in turn interview and select an independent voter to preside over the five-member panel. Commissioners cannot be anyone who has been elected to public office within the last three years nor has served as an officer of a political party. Neuberg was picked earlier this month from a list of five candidates. She said her first priority will be to create a “fair” district map that will be

able to withstand any litigious challenges. The commission is obligated to draw districts that are roughly equal in population, appear compact, attempt to adhere to city and county boundaries and are electorally competitive. The new commissioners may be faced with having to make some dramatic revisions in the coming months. Arizona has gained about a million new residents since 2010 and is projected to add a 10th congressional seat to its delegation. Neuberg, who has lived in Arizona for the last 40 years, said she hopes the commission’s members can establish “mutual trust” for one another and be able to make unanimous, nonpartisan decisions. “I believe I have the unique skill set, as well as the integrity and character, to successfully chair this process,” Neuberg wrote in a statement. Neuberg will likely have to deal with political pressure from both sides, especially considering the hostility that previous chairs have encountered. Colleen Mathis, the last person to hold the job, was forced off the commission in 2011 by then-Gov. Jan Brewer amid accusations of drafting unfavorable maps and holding secret meetings. The Arizona Supreme Court later de-