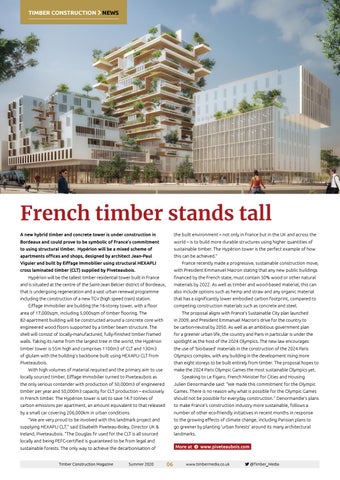 Bordeaux and could prove to be symbolic of France’s commitment

to using structural timber. Hypérion will be a mixed scheme of

sustainable timber. The Hypérion tower is the perfect example of how

this can be achieved.”

Hypérion will be the tallest timber residential tower built in France

financed by the French state, must contain 50% wood or other natural

and is situated at the centre of the Saint-Jean Belcier district of Bordeaux,

materials by 2022. As well as timber and wood-based material, this can

that is undergoing regeneration and a vast urban renewal programme

including the construction of a new TGV (high speed train) station.

that has a significantly lower embodied carbon footprint, compared to

Eiffage Immobilier are building the 16-storey tower, with a floor

competing construction materials such as concrete and steel.

82-apartment building will be constructed around a concrete core with

in 2009, and President Emmanuel Macron’s drive for the country to

engineered wood floors supported by a timber beam structure. The

be carbon-neutral by 2050. As well as an ambitious government plan

for a greener urban life, the country and Paris in particular is under the

walls. Taking its name from the largest tree in the world, the Hypérion

spotlight as the host of the 2024 Olympics. The new law encourages

Olympics complex, with any building in the development rising more

than eight storeys to be built entirely from timber. The proposal hopes to

make the 2024 Paris Olympic Games the most sustainable Olympics yet.

Speaking to Le Figaro, French Minister for Cities and Housing

the only serious contender with production of 50,000m3 of engineered

Julien Denormandie said: “We made this commitment for the Olympic

timber per year and 50,000m3 capacity for CLT production – exclusively

Games. There is no reason why what is possible for the Olympic Games

in French timber. The Hypérion tower is set to save 14.7 tonnes of

should not be possible for everyday construction.” Denormandie’s plans

carbon emissions per apartment, an amount equivalent to that released

by a small car covering 206,000km in urban conditions.

number of other eco-friendly initiatives in recent months in response

to the growing effects of climate change, including Parisian plans to

go greener by planting ‘urban forests’ around its many architectural

Ireland, Piveteaubois. “The Douglas fir used for the CLT is all sourced

locally and being PEFC-certified is guaranteed to be from legal and More at  www.piveteaubois.com

sustainable forests. The only way to achieve the decarbonisation of 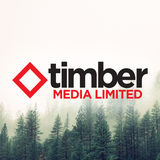