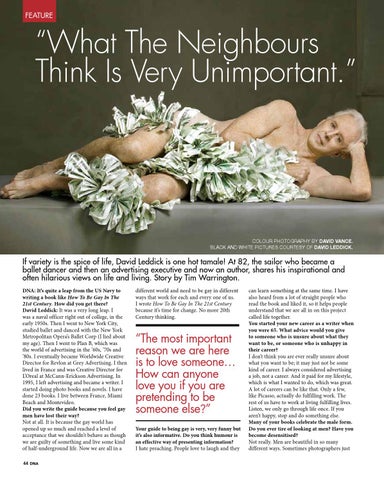 “What The Neighbours Think Is Very Unimportant.”

If variety is the spice of life, David Leddick is one hot tamale! At 82, the sailor who became a ballet dancer and then an advertising executive and now an author, shares his inspirational and often hilarious views on life and living. Story by Tim Warrington. DNA: It’s quite a leap from the US Navy to writing a book like How To Be Gay In The 21st Century. How did you get there? David Leddick: It was a very long leap. I was a naval officer right out of college, in the early 1950s. Then I went to New York City, studied ballet and danced with the New York Metropolitan Opera’s Ballet Corp (I lied about my age). Then I went to Plan B, which was the world of advertising in the ’60s, ’70s and ’80s. I eventually became Worldwide Creative Director for Revlon at Grey Advertising. I then lived in France and was Creative Director for L’Oreal at McCann-Erickson Advertising. In 1995, I left advertising and became a writer. I started doing photo books and novels. I have done 23 books. I live between France, Miami Beach and Montevideo. Did you write the guide because you feel gay men have lost their way? Not at all. It is because the gay world has opened up so much and reached a level of acceptance that we shouldn’t behave as though we are guilty of something and live some kind of half-underground life. Now we are all in a 44 DNA

different world and need to be gay in different ways that work for each and every one of us. I wrote How To Be Gay In The 21st Century because it’s time for change. No more 20th Century thinking.

“The most important reason we are here is to love someone… How can anyone love you if you are pretending to be someone else?” Your guide to being gay is very, very funny but it’s also informative. Do you think humour is an effective way of presenting information? I hate preaching. People love to laugh and they

can learn something at the same time. I have also heard from a lot of straight people who read the book and liked it, so it helps people understand that we are all in on this project called life together. You started your new career as a writer when you were 65. What advice would you give to someone who is unsure about what they want to be, or someone who is unhappy in their career? I don’t think you are ever really unsure about what you want to be; it may just not be some kind of career. I always considered advertising a job, not a career. And it paid for my lifestyle, which is what I wanted to do, which was great. A lot of careers can be like that. Only a few, like Picasso, actually do fulfilling work. The rest of us have to work at living fulfilling lives. Listen, we only go through life once. If you aren’t happy, stop and do something else. Many of your books celebrate the male form. Do you ever tire of looking at men? Have you become desensitised? Not really. Men are beautiful in so many different ways. Sometimes photographers just

copy other photographers so the pictures look similar. But the men don’t look so much alike. You know, none of us are exactly the same. And now new photographers are making men look exciting and much more real. Now they are naked real people, not naked ideal nudes. I love that.

“I said, ‘Can’t you get it up?’ And he said, ‘It is up.’ He went home.” If you could trade places with someone and walk a day in their shoes, who would it be and why? I have never envied someone else their life. But I might like to be the Pope for one day. And step up to bat and say a few things. You were born in 1930. You look amazing. What’s your secret? A lot of it is sleep. You must sleep a lot. I have smoked in the long ago past and I have had a few drinks in my time but not much now as nothing is harder on your looks. I go to the gym and ballet class three or four times a week. And I am no stranger to the cosmetic surgeon. Get rid of that old stuff I say. In your book you say, “There’s nothing wrong with being gay, but a lot of people are doing it wrong.” What are they doing wrong?

They are still acting as though to be accepted they have to make fun of themselves. I still see this a lot on TV and on the stage. I am not crazy about it, just to make people laugh. I don’t want to be a figure of fun. That is very 20th Century. One of your novels is called My Worst Date. What was your worst date ever? At the time I wrote the book, the date in the book was the worst. I said “Can’t you get it up?” And he said, “It is up.” He went home. My friends say it was his worst date, not mine. Joan Crawford or Bette Davis? Bette Davis. She did a film called Of Human Bondage based on a book by Somerset Maugham. She played a prostitute that the leading man was obsessed with, who treated him cruelly. They would never even make a movie like that today. And Joan would never have been able to play that role. A very pertinent subject for a lot of gay men today What 21st Century advice would you give to gay men in Australia? You must decide who you are and then put a life together for that person. You must not concern yourself about what others think or waste your time pretending to be something you are not. No one can love you if they don’t know who you are. Elayne Boosler once said, “Wouldn’t it be great if you could only get AIDS from giving money to television preachers?” What are your views on religion? I have always had a problem doing things other people tell me are right to do. How do they know? I have been a student of Zen for &gt;&gt;

What’s the first thing that comes into your head when you hear the following names? Barack Obama: Sex. He is hot. Have we ever had as hot a president before? Leaders are rarely hot and I think they should be.

Kate Middleton: Smart. She knows exactly what she’s doing. And the Prince is going to be gladder and gladder he married her as the years go by.

Marilyn Monroe: Sad. If she only had one friend who could have said, “Marilyn, you are a star. You have created a unique persona. Play it. There is no reason to want to be Sarah Bernhardt.” Anita Bryant: Dreadful. Poor woman. Married to a gay guy. She really hated her life and turned it on gay men. Women only marry gay men out of lack of self-confidence. Poor Anita. Joseph Stalin: Horrible. Think of the millions who are no longer with us and never had a chance to live just because of one man. And all under the guise of being concerned about mankind. Quentin Crisp: Fun. I knew Quentin well. I do a show called Quentin And I. I should probably have said courageous. No one was braver in confronting the world as a gay man. Oprah Winfrey: I don’t watch television so I only have offscreen opinions. She has done a great deal for women and for the black community – for all of us. Paris Hilton: Silly. It says a lot about our culture that we want to read and know about a so-so blonde.

David Leddick has two new books out: the arty Gorgeous Gallery and the laugh-out-loud How To Be Gay In The 21st Century. He is currently working on a new book, We Offered Them Caviar and Rentboy: The Musical. DNA 45

FEATURE &gt;&gt; many years and it is a spiritual discipline rather than a religion. There is no dogma. The head abbot said to me once, “Don’t be so sure what you want is what you should have.” That was all. I think we all have a destiny and must try to fulfill it. What advice would you give to a young person who is thinking about coming out? What possible reason is there to stay in? The most important reason we are here is to love someone. As I said before: How can anyone love you if you are pretending to be someone else. We are on earth some 70 plus years. Don’t you want to live them? What the neighbours think is very unimportant.

“I am no stranger to the cosmetic surgeon. Get rid of that old stuff I say.” If you could be any character on Downton Abbey, who would you be and why? I only know this show from reading about it. Not Maggie Smith, who has now become a joke about herself. Maybe the titled lady who is the mistress of the abbey? Good costumes. What’s next on the agenda for David Leddick? I have a new book in the spring, published by The University Of Wisconsin Press. They selected it for their Living Out gay and lesbian autobiography series, dedicated to expressing the full range of gay experience. This is a whole new direction for my writing. The book is about a gay man’s romances in his seventies. I am also working on a little production we want to do in NYC, called Rentboy: The Musical. And I am currently writing my Mad Men-era advertising memoirs called, We Offered Them Caviar. That’s about it. H 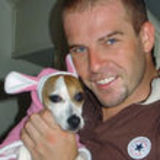