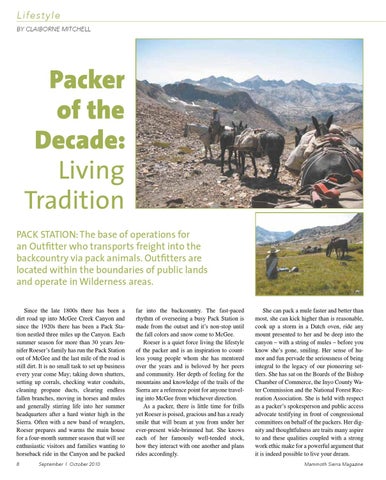 Packer of the Decade: Living Tradition PACK STATION: The base of operations for an Outfitter who transports freight into the backcountry via pack animals. Outfitters are located within the boundaries of public lands and operate in Wilderness areas. Since the late 1800s there has been a dirt road up into McGee Creek Canyon and since the 1920s there has been a Pack Station nestled three miles up the Canyon. Each summer season for more than 30 years Jennifer Roeser’s family has run the Pack Station out of McGee and the last mile of the road is still dirt. It is no small task to set up business every year come May; taking down shutters, setting up corrals, checking water conduits, cleaning propane ducts, clearing endless fallen branches, moving in horses and mules and generally stirring life into her summer headquarters after a hard winter high in the Sierra. Often with a new band of wranglers, Roeser prepares and warms the main house for a four-month summer season that will see enthusiastic visitors and families wanting to horseback ride in the Canyon and be packed 8

far into the backcountry. The fast-paced rhythm of overseeing a busy Pack Station is made from the outset and it’s non-stop until the fall colors and snow come to McGee. Roeser is a quiet force living the lifestyle of the packer and is an inspiration to countless young people whom she has mentored over the years and is beloved by her peers and community. Her depth of feeling for the mountains and knowledge of the trails of the Sierra are a reference point for anyone traveling into McGee from whichever direction. As a packer, there is little time for frills yet Roeser is poised, gracious and has a ready smile that will beam at you from under her ever-present wide-brimmed hat. She knows each of her famously well-tended stock, how they interact with one another and plans rides accordingly.

She can pack a mule faster and better than most, she can kick higher than is reasonable, cook up a storm in a Dutch oven, ride any mount presented to her and be deep into the canyon – with a string of mules – before you know she’s gone, smiling. Her sense of humor and fun pervade the seriousness of being integral to the legacy of our pioneering settlers. She has sat on the Boards of the Bishop Chamber of Commerce, the Inyo County Water Commission and the National Forest Recreation Association. She is held with respect as a packer’s spokesperson and public access advocate testifying in front of congressional committees on behalf of the packers. Her dignity and thoughtfulness are traits many aspire to and these qualities coupled with a strong work ethic make for a powerful argument that it is indeed possible to live your dream. Mammoth Sierra Magazine