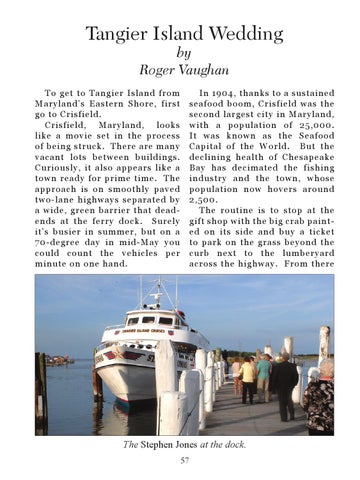 To get to Tangier Island from Marylandâ&#x20AC;&#x2122;s Eastern Shore, first go to Crisfield. Crisfield, Maryland, looks like a movie set in the process of being struck. There are many vacant lots between buildings. Curiously, it also appears like a town ready for prime time. The approach is on smoothly paved two-lane highways separated by a wide, green barrier that deadends at the ferry dock. Surely itâ&#x20AC;&#x2122;s busier in summer, but on a 70-degree day in mid-May you could count the vehicles per minute on one hand.

In 1904, thanks to a sustained seafood boom, Crisfield was the second largest city in Maryland, with a population of 25,000. It was known as the Seafood Capital of the World. But the declining health of Chesapeake Bay has decimated the fishing industry and the town, whose population now hovers around 2,500. The routine is to stop at the gift shop with the big crab painted on its side and buy a ticket to park on the grass beyond the curb next to the lumberyard across the highway. From there

The Stephen Jones at the dock. 57