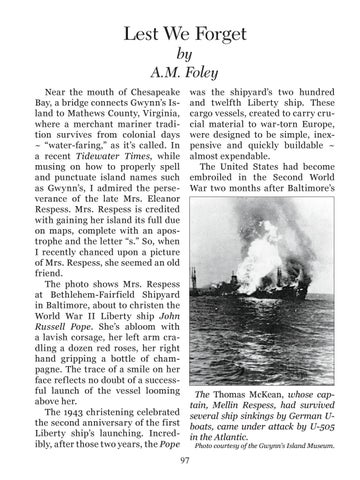 Lest We Forget by A.M. Foley

Near the mouth of Chesapeake Bay, a bridge connects Gwynn’s Island to Mathews County, Virginia, where a merchant mariner tradition survives from colonial days ~ “water-faring,” as it’s called. In a recent Tidewater Times, while musing on how to properly spell and punctuate island names such as Gwynn’s, I admired the perseverance of the late Mrs. Eleanor Respess. Mrs. Respess is credited with gaining her island its full due on maps, complete with an apostrophe and the letter “s.” So, when I recently chanced upon a picture of Mrs. Respess, she seemed an old friend. The photo shows Mrs. Respess at Bethlehem-Fairfield Shipyard in Baltimore, about to christen the World War II Liberty ship John Russell Pope. She’s abloom with a lavish corsage, her left arm cradling a dozen red roses, her right hand gripping a bottle of champagne. The trace of a smile on her face ref lects no doubt of a successful launch of the vessel looming above her. The 1943 christening celebrated the second anniversary of the first Liberty ship’s launching. Incredibly, after those two years, the Pope

was the shipyard’s two hundred and twelfth Liberty ship. These cargo vessels, created to carry crucial material to war-torn Europe, were designed to be simple, inexpensive and quickly buildable ~ almost expendable. The United States had become embroiled in the Second World War two months after Baltimore’s

The Thomas McKean, whose captain, Mellin Respess, had survived several ship sinkings by German Uboats, came under attack by U-505 in the Atlantic. Photo courtesy of the Gwynn’s Island Museum.